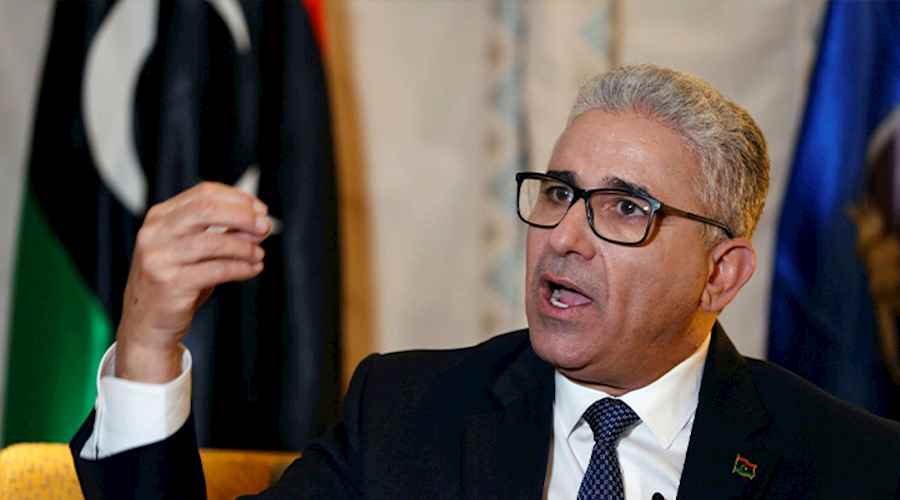 On 17 May 2022, Prime Minister-designate, appointed by the House of Representatives (HoR), Fathi Bashagha, announced he would enter Libyan Capital to assume his ministerial duties. Bashagha had intended to hold a press conference to clarify the current situation, but his media office announced he left the capital along with several of his cabinet ministers after clashes erupted with militias loyal to Abdel Hamid Dbeibeh, head of dissolved Government of National Unity.

The Sudden Entrance of Bashagha

Bashagha’s attempt to enter Tripoli came as surprise. His convoy included a group of his cabinet ministers, supported by Al-Nawasi and 444 brigades, alongside other armed groups from west Libya. His attempt to enter the city sparked clashes with Dbeibeh loyalists. In light of these events, the scene in Libya could be understood through the following contexts:

1.    Meetings in Montreux and Cairo:

Bashagha’s sudden movements could be examined along these meetings which took place in 13 and 14 May. Several Libyan factions attended, including members of parliament, representatives of Libyan National Army, and other Tripoli-based armed groups. The meetings were held under the auspices of Geneva-based Centre for Humanitarian Dialogue.

The meetings led to agreement on several points. Most notably, the factions agreed to establishing a unified military institution. Further meetings are planned in the coming period in Morocco where the factions would discuss execution mechanisms. In Cairo, second round meetings are making slow progress as members of upper and lower houses work to agree on a draft constitution.

Bashagha’s entry to Tripoli sparked intense violence in the city. Clashes erupted in the Mansoura and Souk Al-Thalath areas in the centre of Tripoli hours after Bashagha arrived to officiate his government, which was mandated by the Libyan House of Representatives that is based east of the country. In Geneva, Bashagha reached an agreement with leaders of groups involved in the clashes, including 8th Brigade, headed by Mustafa Kaddour, which holds control over the port of Tripoli and adjacent area, where the 444 brigade is stationed and Abu Sita base is located.

Reports have indicated that Bashagha has gained the support of Misrata-based Brigade 166, Brigade 777, Squadron 28, Tripoli Brigade, and Special Deterrence Forces (Al-Radaa). Through Alzintan city southwest of Tripoli, Bashagha managed a successful entry of Tripoli, supported by the armed groups. Yet his convoy was subjected to heavy firing by Dbeibeh’s Stability Support Apparatus, forcing Bashagha’s convoy to retreat. Commander of Brigade 444, Mustafa Hamza, mediated between the two rivals, preventing further escalation, and allowing a safe passage for Bashagha’s forces out of the city.

The UN special adviser on Libya, Stephanie Williams, called for calm and for rival parties to refrain from taking part in the clashes; a similar statement was issued by the United States; German ambassador asked all factions to remain responsible and resort to political dialogue; and UK ambassador stressed on the importance of a sustainable political solution. Force cannot replace dialogue, she said. EU foreign secretary expressed his concern over events that took place in Libya.

Reports have speculated that Bashagha’s withdrawal came in direct result of international pressure. The international community is concerned with preventing a total civil war in Libya. Yet statements issued by foreign embassies were careful not to condemn one side over the other, keen to remain balanced in a multifaceted and delicate conflict.

These events have revealed significant clues on the current situation in Libya, outlined as follows:

Clearly Bashagha attempted to forge a new reality in which Dbeibeh would be out of the icture. A surprise entry into the capital was aimed at shuffling the cards for Dbeibeh and taking control of the city while paralysing rival government. He was not successful, evidently; he underestimated the Dbeibeh’s armed power on the ground. Many of the groups who had been supporting Bashagha changed their stance and stood aside to avoid sliding into an uncontrollable conflict.

Bashagha attempted to manoeuvre the recent initiatives which aim to pull the country out of the stalemate. These initiatives seek to increase the authorities of the presidential council president, currently headed by Mohamed al-Menfi, while limiting his chances of the government presidency. His aim might have been to gain ground ahead of the coming elections.

Another initiative around which these events take place is the Libyan Tribes Union’s “No initiative”, announced from Tunisia. Signed by more than 1 million Libyans, they withdrew their trust from all Libyan institutions until a new parliamentary and presidential elections take place, demanding the judiciary council assumes power in the interim to ensure impartiality of elections.

Earlier in May, Bashagha paid an unannounced visit to Turkey, the second in two weeks, where he met Undersecretary of the National Intelligence Organization, Hakan Fidan. Reports have indicated that Bashagha might have been aligning with Ankara ahead of his entrance to Tripoli.

Resulting from his failure to capture the capital and leaving domestic and international partners disillusioned by his inability to garner the needed support, especially in the western region, to claim his seat. Concurrently, Bashagha’s unsuccessful attempt have played in favour of Dbeibeh who was able to expel his rival’s armed militias, weakening their positions with relative ease. Another achievement for Dbeibeh was the neutral positions western powers took in relation to the clashes – further diluting Bashagha’s position and international support.

Bashagha’s unsuccessful attempt will have a knock-on effect on Libya’s political landscape in the immediate and short terms, summarised in the following:

By encircling Bashagha’s loyalist groups based in Tripoli. He sacked the head of military intelligence, Osama al-Juwaili, who reports indicated may have helped Bashagha’s entry into Tripoli, and through the Tunisian borders a month earlier.

Moreover, Dbeibeh has been keen to demonstrate his control by touring the capital in the days that followed the end of Janzur clashes west of Tripoli. Other reports have revealed Dbeibeh has been reinforcing his militias to prevent any future attempts by his rivals.

Realising taking control of the city has proved much harder than expected, Bashagha announced the commencement of his government from Sirte, where he hopes to gain more support across the country and drain the Dbeibeh’s funds.

These events are expected to shake the country politically, as well as hinder any agreement on a draft constitution. The scene is ever more complicated, with a myriad of positions by regional and international partners on the question of Libya. Russia, for example, has been opposing a new term for UN’s commissioner, Stephanie Williams.

Domestically, the lack of consensus on a workable solution in Libya was reflected in a statement by Khalid al-Mishri, Chairman of the High Council of State, who stressed on the importance of reaching an agreement on a constitution that represents all Libyans. Thus his advice to Bashagha to resign and to Dbeibeh to accept political change in the country.

The US follows these developments with grave concern. Ned Price of the State Department said on 17 May that discussions regarding the constitution are paramount to breaking the stalemate and preventing forceful takeover of power, which would lead the country into a violent spiral.

In conclusion, the outlook for Libya looks worrying. Deep divisions in the country exacerbated by issues such as the closer of oil fields are increasing the chances of an all-out armed conflict. A divided international community on the question of Libya is certainly not helping. The situation may continue for the short term until factions manage to reach a middle ground, paving the way for a new way forward. Perhaps meetings in Cairo may be the first step in the right direction.