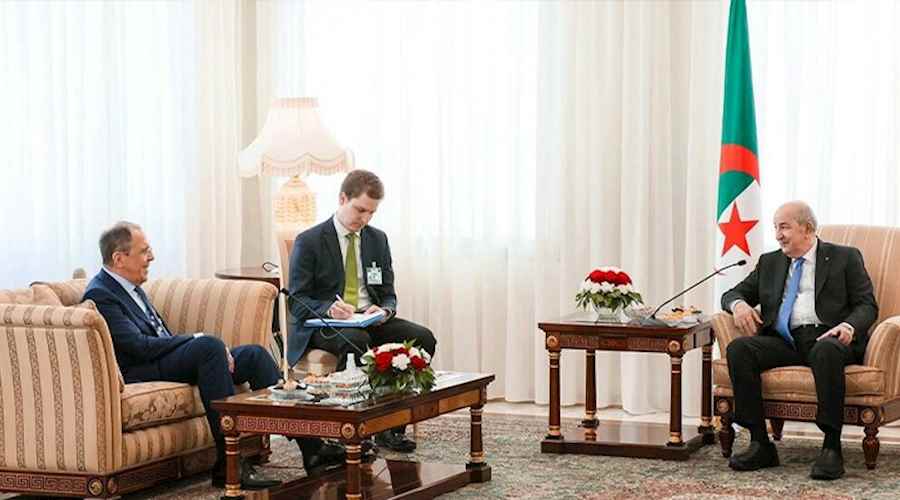 It is noteworthy that this is the first time Lavrov visits Algeria since Tebboune assumed office. It is also Lavrov's first visit to an Arab country since the beginning of the Russian military operation in Ukraine. In addition, the visit coincides with the 60th anniversary of diplomatic relations between Algeria and Russia.

During the visit, a strategic partnership agreement, reflecting a new dimension of Russian-Algerian relations, was discussed. In this respect, the visit is meant to achieve several objectives, as per the following:

Lavrov visited Algeria to strengthen relations between Moscow and Algiers. Algeria has always been a key strategic partner of Russia in the Maghreb and North Africa, as Moscow is fully aware of the political weight of Algeria in Africa. Therefore, during the visit, Lavrov said that Moscow and Algiers were about to sign an agreement reflecting the bolstered relations between both countries.

Lavrov's visit to Algeria comes as no surprise, given the noticeable rapprochement between Russia and Algeria. Other indicators of this rapprochement include the recent talks between the Russian President and the Algerian President, in April 2022, discussing issues of mutual interest.

During the visit, ways of developing defense cooperation between Russia and Algeria were discussed. It is known that Russia has been a key partner in cooperating with Algeria to enhance its military capabilities; Algeria is the third importer of Russian arms, buying more than 70% of its weapons from Moscow. In April, Moscow had announced that it would conduct joint military exercises with Algiers in November. In this respect, Lavrov stressed that Russia is keen on enhancing technical defense cooperation with Algeria in the upcoming period.

Ways of enhancing economic ties between Russia and Algeria were also discussed during Lavrov's visit. Lavrov said that the Russian-Algerian Joint Government Committee will hold a meeting within a few months to discuss economic cooperation in Algeria. The meeting had previously been postponed due to Covid-19 pandemic.

It is worth mentioning that Algeria's wheat imports from Ukraine had to be stopped on account of the war. Therefore, Algeria announced that it would import wheat from countries other than Russia, though the latter is a top importer of wheat. Accordingly, Lavrov’s visit aimed to understand the reasons for the Algerian stance.

Lavrov's visit took place against the backdrop of Algeria's neutral attitude towards the Russian-Ukrainian war. For example, Algeria voted to abstain, in an emergency session on March 2, 2022, on a resolution to condemn Russia’s invasion of Ukraine. Algeria also abstained when a vote was held to suspend Russia from the UN's Human Rights Council. Such stances were perceived as supporting Russia implicitly, and Lavrov’s visit could have probably been to express Russian appreciation for the Algerian stance.

Lavrov’s visit is of paramount political significance as per the following:

Lavrov’s visit to Algeria coincided with the West’s expression of increased interest in bolstering relations with the country. Several European officials have been visiting Algeria lately, specifically throughout the past couple of months. Consequently, Moscow has come to realize the significance of maintaining strong relations with Algeria. Thus, Lavrov's visit attempted to show the West that Moscow still retains a strong partnership with Algeria, and that the European attempts to dissuade Algeria will not bear fruit. That is especially as the West has lately expressed support for Morocco in the Western Sahara conflict, which, in turn, has aroused resentment in Algeria.

However, Europe needs to strengthen its relations with Algeria in the medium term, through investing in the Algerian energy sector, as Europe need to secure other sources of LNG, other than Russia.

Lavrov’s trip came after the US Secretary of State, Antony Blinken, had visited Algeria on March 30. Blinken’s visit was the first one in 22 years. The visit aimed to guarantee that Algeria would adhere to the agreements it had signed with European countries to provide them with LNG. Blinken also urged Algeria to review its relations with Russia, in an attempt to force the latter to change its foreign policies, not only regarding international issues, but also regarding issues in the Middle East, notably the Western Sahara crisis and the Libyan crisis.

Thus, the timing of Lavrov's visit to Algeria conveys a message to Washington, as it shows that the Russian-Algerian relations will not be severed, and that there will be more cooperation and coordination between both countries in the political, economic and military fields.

It is noticeable that both Russia and Algeria are concerned about the developments in war-torn countries in the region, namely the following:

A.  Libya: Algeria is playing an important role in this crisis, as it is a key supporter of stakeholders in Western Libya. Thus, Algeria is indispensable and a required in spurring political change and reconstructing the state institutions in Libya.

However, one must note, that Russia is adopting an opposing stance in Libya. Moscow is maintaining strong presence in central Libya through Al-Jufra military base. Russia is also influential in Fezzan, in southwestern Libya; since September 2020, Wagner has deployed its fighters in the Barak al-Shati Airbase and Tamanhent Airbase, 700 to 750 kilometers from southern Tripoli.

Besides, Russia's influence can easily be noticed in important oilfields in Libya, especially El Feel and Sharara oilfields. Moscow has strategic interests, which make it necessary for it to stay in central and southern Libya from whence it will expand its influence in the Sahel and the Sahara.

Given the relentless efforts to attain coordination between eastern Libya and western Libya (which was strongly reflected in agreeing on electing Fathi Bashagha as a prime minister), it is important that Moscow and Algiers reach an understanding concerning the situation in Libya, and to ensure Washington will not influence the Algerian stance.

B.   Mali: Lately, Moscow managed to curb Western influence in Mali, especially after Bamako broke off from defence agreements with France and started to engage the services of Russia's Wagner.

As Algeria has always had special relations with Mali, it is important for both Moscow and Algiers to ensure they share a mutual understanding concerning Bamako. This was reflected in Lavrov’s statements, during his visit to Algeria concerning the urgency of holding a national dialogue comprising all the political stakeholders in Mali.

In addition, Algeria is keen on coordination with Russia in the areas of intelligence and security, to protect its national security and strategic interests from terrorist threats in Mali, especially as Russia's Wagner plays an important role in combatting terrorist organizations there.

In conclusion, Lavrov's visit to Algeria shows that though Moscow is preoccupied with the Ukrainian crisis, it is still capable of maneuvering globally to maintain its spheres of influence. This cooperation is expected to develop further, specifically pertaining regional issues, on the short-run.