Implications of German Foreign Minister’s tour to Mali and Niger 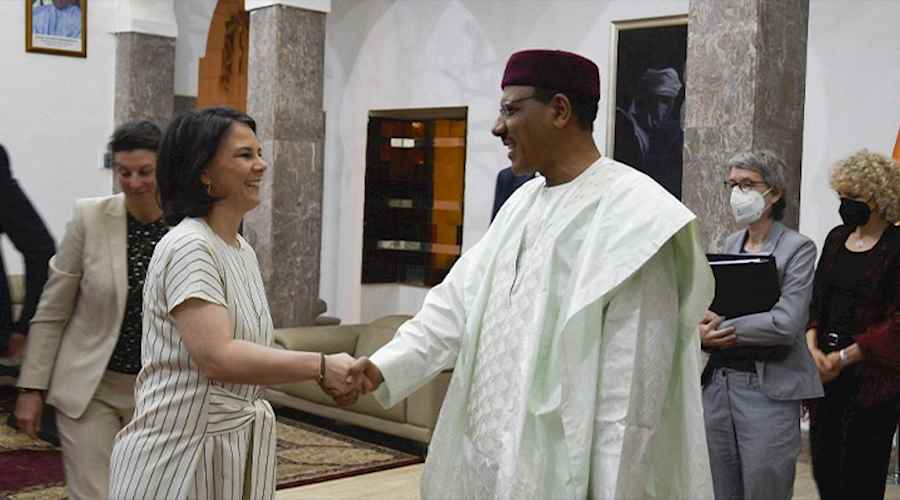 German Foreign Minister Annalena Baerbock, on April 12 and 13, made an important visit to Mali and Niger that is set to determine the future of Germany’s military presence in Mali. The German government is divided into those who support a continued presence in Mali and those who push for complete withdrawal of the German troops from the African country.

Baerbock’s tour to the Sahel region comes as part of the European Union’s reconstruction of its military presence. This can be explained as follows:

1.    The EU’s termination of its missions in Mali:

The German foreign minister's visit to the Sahel region came one day after the organization’s decision to terminate its training mission in Mali. Announcing the decision, the EU's foreign policy chief Josep Borrell noted that the EU’s missions will continue in the rest of the Sahel countries and because the region is a priority for the organization, it will not give it up.

The European Union said it has not received sufficient guarantees from the Malian government about preventing Russian private security firm Wagner from interfering in the process. It should be noted that the EU’s reaction came after the Malian authorities, in a first for the African country, banned a German military plane from entering the Malian airspace.

Niger’s parliament, on April 22, discussed a proposal from the government to host more foreign troops in the country for combating terrorism. Because the party of president Mohamed Bazoum has a majority in the parliament, the lawmakers are likely to vote for the proposal despite condemnation from non-governmental organizations.

Before Baerbock’s tour to the Sahel, German Defense Minister Christine Lambrecht visited Mali on April 9 to meet the 300 German troops in the town of Gao. These troops were stationed there as part of the EU’s training mission. Germany has another 1100 soldiers deployed elsewhere in Mali as part of the UN peacekeeping mission, known as MINUSMA.

Lambrecht called on the Malian authorities to launch a full-scale investigation into the incidents that took place in Mora town in late March. She said that it is difficult for the German army to maintain a presence in Mali. In Mora, a count-terrorism operation was conducted against terrorist leaders, but Western media alleged that civilians were killed in the operation.

The German foreign minister’s visit to Mali and Niger has significant implications that can be outlined as follows:

1.    Attempts to resolve controversy in Berlin:

Within the German government, a controversy continues about the nature of relations with the Malian junta led by Colonel Assemi Goita. Although Berlin and the European Union continue to criticize the transitional authorities since they seized power in a military coup d’etat led in May under Goita, who was also criticized for his relations with Moscow and private security firm Wagner. But there are calls inside the German parliament urging for resuming relations with Bamako to deny Russia an opportunity to take over.

On the other hand, others in the German parliament firmly oppose any attempt to extend the mission of German troops in Mali. But the opposition comes from only two German parties which are the Alternative for Germany (AfD) and the Left Party.

Within this context, the German foreign minister held meetings with representatives of the governments of Mali and Niger as well as non-governmental organizations in addition to consultations with German troops stationed in the region. A spokesperson of the German government said the goal of the tour is to obtain an accurate picture of the political and security landscape in both African countries to make a final decision on the future of German presence in Mali and the Sahel region as a whole.

Because the mandate of German troops in Mali ends on May 31, the German parliament has to make a final decision on the future of Germany’s military involvement in the region, especially after France decided to withdraw its own troops from there in February.

One proposed solution is that Berlin should hold talks with Niger to host some of the troops which were part of the EU’s training mission while keeping its troops involved in MINUSMA and leave the door open for any future talks with the Malian government.

France moved its military operations center in the Sahel from Mali to Niger, and Germany too is mulling a similar move, especially because it already has a logistics hub in Niamey, Niger. Assessment had it that this issue was at the center of talks held by Baerbock and President of Niger Mohamed Bazum while the Niger parliament was working to approve the stationing of  foreign troops to the country.

3.    Countering the food and refugee crisis:

Baerbock noted that terrorist groups in the Sahel region are not the only threat to the stability of the region, and that the implications of the ongoing Russia-Ukraine war for the region, especially regarding food security as grain exports from the warring countries to the Sahel were halted.

Ahead of its Africa tour, Baerbock stated that she will keep the focus of her talks on the issue of food supplies, which means that Germany will increase its development and humanitarian aid to the Sahel countries in a bid to preempt the issue of migration from this region. While in Niger, Baerbock announced that Germany offered USD 100 million in assistance to the displaced in this region, and noted that Berlin will allocate another USD15 million for combating the food crisis there.

4.   Division of roles between Paris and Berlin:

The European Union made a decision to end its training missions in Mali. But because it is not willing to let Russia take over, Berlin is yet to make a final decision on this matter. This may reflect contrasting European stands, or an attempt by Berlin and Paris to divide the roles, especially after France was forced to withdraw its troops upon request from Mali. This was not France’s favorite choice, and what underscores this view is that the visiting German foreign minister called on the Malian authorities to stop cooperation with Wagner.

It is therefore possible to say that Europeans are not looking for complete withdrawal from the Sahel that would allow Russian influence to expand in the region. But Germany’s stand on maintaining a presence inMali remains uncertain. But anyway the German government is holding consultations with Niger about an alternative in case Berlin, in the coming few weeks, decides to withdraw from Mali. However, the likely course of developments is that Berlin will extend the mandate of its military forces in Bamako, at least for a certain extendable period of time.