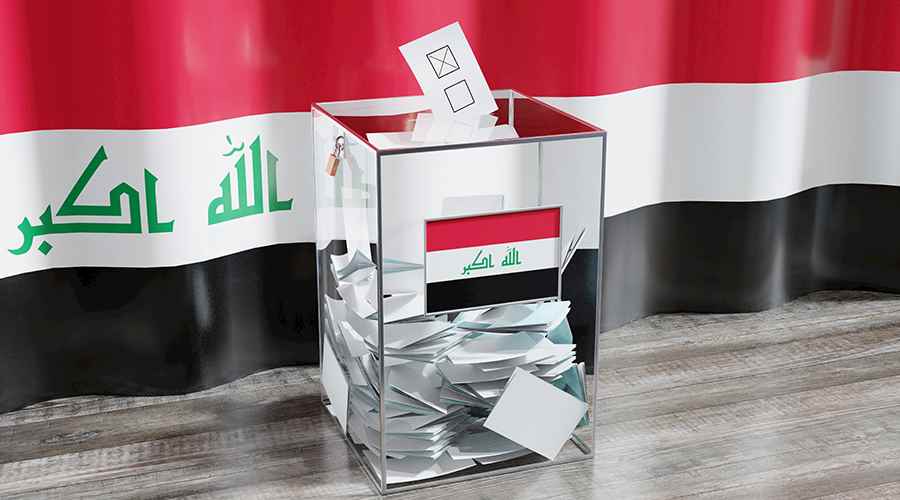 Implications of the preliminary results

The elections succeeded in reflecting popular rejection of regional powers’ negative interference in the Iraq’s internal affairs.The following stand out among the implications of the elections:

The recent elections gave voice to popular anger against Iran and the Iranian-backed politicians and parties. The poor performance of these parties in the elections was reflected winning less seats than in the previous elections.

Pro-Iran Fatah Alliance won only 14 out of a total 329 seats of the parliament, compared to 47 seats in 2018. The main reason of its decline is that its armed factions were accused by activists of the October 2019 protests (referred to as Tishreen movement), of killing protestors and having ties with Tehran.

This was further evidenced by the failure of Faleh al-Fayyad, head of the Popular Mobilization Forces (PMF) and leader of the National Contract Alliance to win any seats.

The National State Forces Alliance, comprised of the Hikma Movement led by Ammar al-Hakim, the al-Nasr (victory) Coalition, led by former prime minister Haidar al-Abadi, suffered a huge loss, gaining only 2 and 3 seats, compared to 42 and 19 seats, respectively, in the 2018 elections.

The only exception was Nouri al-Maliki who managed to win 37 seats, up from the 26 seats he won in the 2018 elections. Despite that, Shi’ite pro-Iran blocs won only 54 seats, which means that the three Iran-allied parties, even if they united in one alliance, will not form the biggest bloc in the parliament and chose the next prime minister. Rather they will have to look for other alliances with non-Shiite political forces.

Moqtada al-Sadr was the biggest winner in Iraq’s parliamentary elections, which was mainly because he defended the Tishreen protestors, those who took to streets in October 2019 to protest Iran’s influence and the Iraqi government corruption. The Sadrist Movement won 73 seats, compared to 54 seats in the 2018 elections.

On the other side, blocs formed by the Tishreen activists, such as Imtidad and affiliated candidates, won 15 seats, while a new bloc known as Ishraqet Kanoon secured six seats. Therefore, forces opposing Iran’s influence in Iraq won an additional 21 seats adding a total of 94 seats to the credit of anti-Iranian Shiite forces.

The Muttadidoon bloc, led by former speaker of the parliament Usama al-Nujayfi, who is close to Turkey, did not win any seats in the recent elections. Also failing was the Iraqi Islamic Party, a political arm of the Muslim Brotherhood, which previously won seats in most Iraqi Sunni-majority provinces.

The alliance led by Parliament Speaker Mohammed al-Halbousi, won 38 seats. The win was driven by the alliance’s success in executing a large-scale urban development in al-Anbar province in a record short time while in control of the province. Moreover, al-Halbousi appeared to be opposing Iran and Turkey, and called on both countries not to interfere in the internal affairs of Iraq. He even survived an attempt by Usama al-Nujayfi, Khamis al-Khanjar, who lives in Turkey, and Nouri al-Maliki collaborated to oust him from the parliament because he insisted on a proposal to have several constituencies for every province during the previous elections.

The KDP, led by Masoud Barzani, dominated the political scene in Iraq’s Kurdistan Region winning 32 seats, while the Patriotic Union of Kurdistan won 15 in the preliminary results. The Change Movement, known as Gorran, lost all its seats, which means that its alliance with the Union did not help increase their representation on the federal level. Moreover, a new political force called the New Generation Movement emerged in Sulaymaniyah after it won 6 seats.

Although the forces supporting popular protests in Iraq’s southern provinces that oppose Iran’s influence failed to take shape in a consistent political party, they eventually succeeded in influencing the elections on several levels. This was evidenced by an evident regress of a majority of Shiite blocs loyal to Iran. Additionally, the Tishreen movement reiterated the importance of nationalism and protection of the sovereignty and independence of Iraq against foreign interference not only by Iran but also parties with ties with Turkey.

7- The impact of the new electoral system:

This system played a significant role in the elections by enforcing the single non-transferable vote according to which Iraq was divided into 38 constituencies distributed according to the number of provinces and their population. A voter can choose only one candidate.

Previously, elections were conducted under proportional representation which backed political parties and sometimes saw religious scholars backing a specific candidate. In the recent elections, the new voting system supported the chances of independent candidates regardless of political parties, especially when these candidates are known for integrity and efficiency, while also curbing the impact of sectarian favoritism. It also kept voters’ attention focused on important issues such as public services, which was one of the main causes of the October protests.

The latest elections are set to have a significant footprint on Iraq’s political landscape. The impact can be outlined as follows:

1- Al-Sadr influence in the government’s formation:

The Sadrist Movement announced that it has the right to form a new government after it led the race. It also revealed its plans for the move. Referring to Iran-backed militias which are his foes, Moqtada al-Sadr, on October 11 said he will put an end to the use of arms outside the control of the state.

It should be noted that Qassem Soleimani, commander of the Quds Force, threatened previously to kill al-Sadr. The cause of this bitter enmity is that the Sadrist Movement represents the Iraqi patriotic movement and rejects to act as a proxy serving the Iranian agenda.

This was evidenced by al-Sadr’s announcement of “welcoming all embassies without any exception, viewed as a challenge to Tehran's influence and attempts to isolate Iraq from the Arab region. Forces backed by Iran also sought to block Prime Minister Mustafa al-Kadhimi from opening up to Arab states.

Iran was the biggest loser in the recent elections. Commander of the Revolutionary Guard Corps, Esmail Qaani visited Baghdad on the same day the results of the elections were announced. The visit represents Tehran’s attempt to minimize its losses in Iraq by attempting coordination with Iranian-backed Shi’ite forces to try to return to the political landscape, try to contest the results or use the arms of its militia groups.

Iran-allied militias did in fact begin to walk one of these paths: casting doubts on the integrity of the elections, and threatening to take to arms. This was another signal that Iran-allied forces have a slim chance of having a role in forming a new government and might well consider engaging in clashes with other forces.

The so-called Shi’ite Coordination Framework, which includes the Fatah Alliance and the al-Nasr Coalition, rejected the results in an official statement and announced that it is taking all available measures to prevent manipulating the votes, but did not explain whether it will do so through officially contesting the results through the High Electoral Commission, or through the use of militant factions’ arms.

The Framework’s stand coincided with statements by Ali al-Askari, a senior leader with Kataib Hezbollah, one of the most influential factions of the PMF fighters that are loyal to Iran, in which he said that the PMF are being “the main targets and have to make up their mind and prepare to defend their sacred entity.”

Without a doubt, the elections stripped Iran’s militias of their popular cover and revealed the Iraqi people’s stand against the existence of entities outside the control of the state. This might prompt some of these forces to resist, but this time it will have to clash with the will of the Iraqi people.

3- Improving the chances of al-Kadhimi and al-Sadr in the new government:

The results of the elections played into the hands of Prime Minister Mustafa al-Kadhimi and Moqtada al-Sadr. Although al-Kadhimi did not run in the race, there are signals indicating that a tacit alliance between al-Kadhimi and al-Sadr who might nominate al-Kadhimi as prime minister, especially in light of a consensus between the two about the need to confine all arms to the hands of the state, the importance of improving public services, opening up to other Arab states and getting rid of Iran’s negative influence on Baghdad.

To form the new government, a wide coalition needs to be built. The forces that are expected to take part in forming the new government are the Sadrist Movement (73 seats), Taqaddum, led by al-Halbousi (38 seats), the Democratic Kurdistan Party (32), and all Kurdish parties (64). The first three now have a combined 143 seats. But if all Kurdish forces entered the alliance, it will have a total of 175 seats, while a coalition representing at least 165 members of parliament can form a new government.

Another alternative might be available for the Sadrist Movement, and that is forming a coalition with Taqaddum and the Democratic Kurdistan Party as well as forces that emerged from the October protests and already have 12 seats. Such a coalition would have a total of 164 seats, and will need only one more seat to be able to form a new government, provided that the final results confirm that these parties won the respective number of seats announced in the preliminary results.

Overall, the Iraqi parliamentary elections clearly showed Iraqi voters’ willingness to put patriotism before sectarianism, a significant development showing that bets placed by regional powers, and Iran in particular, on sectarian policies will be no guarantee for maintaining their influence on Iraq and that Baghdad will go forward to restore its sovereignty. While the recent elections represent only a beginning of a new path, Iraq will have many steps to make, most importantly to block Iran’s tools operating inside Iraq.