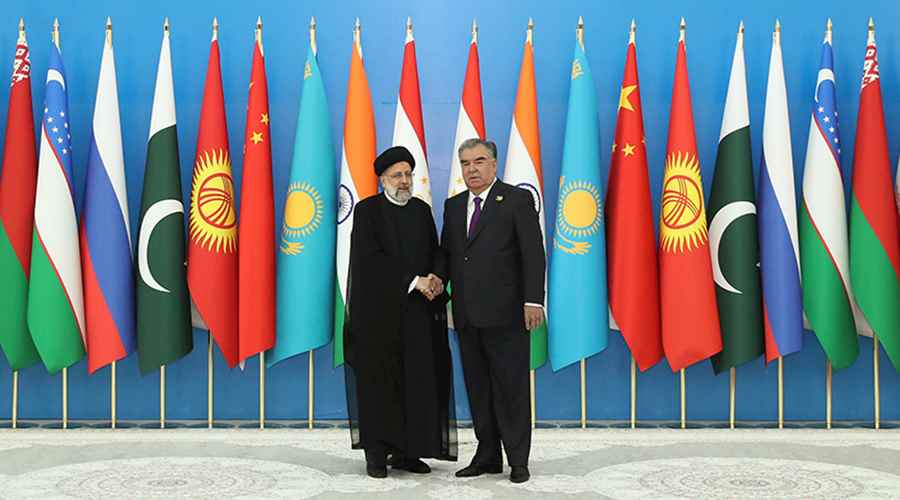 The 21st summit of the ‘Shanghai Cooperation Organization’ (SCO) concluded on September 17, 2021 in the Tajik capital Dushanbe. Its meetings lasted for two days, and its discussions revolved around the Afghan crisis and the collective tackling of new threats facing the Central Asian region, following the US withdrawal from Afghanistan and the return of the Taliban to power. At this meeting, the SCO announced its agreement to grant Iran full membership after it had been holding an observer status since 2005.

The SCO was founded on June 15, 2001 in Shanghai, China, and included China, Russia, Kazakhstan, Tajikistan, Uzbekistan and Kyrgyzstan. Its charter was signed in June 2002 and became effective on September 19, 2003. The organization is working to expand the frameworks of political and economic cooperation between its member countries. In 2005, Iran, India and Pakistan joined the organization as observer members. Then India and Pakistan became permanent members in 2017.

The matter of Iran's membership in the SCO developed after Iran has taken certain steps over the past years. Ebrahim Raisi's heading the Iranian delegation at the Dushanbe meeting, in his first external activity since he took office last August, indicates the signficance of this meeting for Tehran, specifically that Raisi was accompanied by a high-level delegation that included a number of ministers. Iran's membership in the SCO comes in the context of its quest to achieve a set of goals, most notably the following:

1.   Achieving progress at the level of Iranian foreign policy, to the credit of President Ebrahim Raisi, in the face of internal public opinion, particularly among the circles of young people who feel frustrated after the stalemate in nuclear negotiations with the West. This is in addition to the continuation of international sanctions resulting from Washington’s withdrawal from the Iranian nuclear agreement in 2018, which still has negative repercussions on broad sectors of the Iranian people.

2.   Breaking the political and economic isolation that the Iranian regime has been suffering from, since the US withdrawal from the nuclear agreement, and the failure to achieve substantial progress during the recent Vienna talks, lead to the suspension of these talks, and Western countries  are holding Tehran responsible for this, particularly since the Iranian regime has placed many non-substantive obstacles for the West It refusing to respond to the limitations put forward by the negotiators, and conditioning serious negotiations to the lifting of economic sanctions.

3.   Demonstrating political consensus with Russia and China over a number of major issues of concern to the member states of the SCO, particularly the Afghan issue, specifically after the US withdrawal from Afghanistan and Taliban’s takeover of power once more, in addition to the vagueness regarding the forces that will fill this vacuum left by the US. Iran sees this as an opportunity to intervene in Afghanistan due to its extended relations with the Taliban and its previous hosting of Afghan dialogue conferences on its land. Iran also sees a vital importance in these developments which can be used to find common grounds for future dialogues with Washington, where Tehran imposes itself as an influential element in the Afghan issue during any upcoming regional discussions or arrangements.

4.   Emphasis on the strategic relationship with China, as the two countries had signed in March 2021 the ‘Comprehensive Strategic Cooperation’ document, which is to last for 25 years, and includes political, economic, military and other fields of cooperation. Tehran considers this a qualitative breach of the sanctions imposed on it, specifically since the Iranian vision perceives the Chinese move to be a challenge to the US will and a direct reaction to the recent targeting of Beijing by US foreign policy. Particularly, Iran is one of the key sources of supplying China with oil in return for the latter being the main outlet for Tehran's needs of goods and technology, in addition to being the source of developing the construction sector and maintenance of Iran's oil refineries.

The Iranian regime is aware of the limited benefits of its membership in the SCO, given the measures that must be taken by the organization to actually integrate Tehran into its system as a full member state, which may take two years. This comes in addition to the fact that Russia and China control the foreign policy decisions of the organization. However, joining the organization in itself remained an Iranian aspiration in pursuit of some gains, which are as follows:

1.  Fostering Iran's position in Central Asia, specifically in the former Soviet republics that are members of the SCO. The Iranian regime also presents itself as a desirable partner through its commitment to combating China's ‘three axes of evil,’ namely terrorism, drug smuggling, and refugee flows.

2.    Seeking appropriate means to penetrate Afghanistan, under the cover of the SCO, especially with the SCO’s decision in 2017 to revive the contact group with Afghanistan, and also in light of the Russian desire to involve Iran in the four-way talks on Afghanistan (which includes the US, Russia, China and Pakistan). This is in addition to the gains that Iran will achieve as a result of the reconstruction process in Afghanistan if it begins, especially since the contracting sector in Iran is almost entirely controlled by the Revolutionary Guards.

Regarding the seriousness of these gains, it can be said that the current framework of the SCO does not provide an appropriate formula for Iranian ambitions due to the absence of influence resulting from the collective work dynamics within the organization. For example, there is no Russian-Chinese axis that Iran may count on to make breakthroughs on the international arena. On the other hand, the volume of trade in national currencies between Iran and Russia and China remains modest despite the previous agreement to remove USD transactions and find an alternative system for "SWIFT". This means that the aspired economic returns from Iran's membership in the SCO will be negligible, and that the issue will go back again to bilateral agreements apart from the economic frameworks of the organization.

Inter-disputes within the SCO remain an obstacle to achieving its goals. The decision-making mechanism within it requires unanimity among member states to implement any of the decisions, which hinders the enhancement of the performance of the organization and the achievement of the aspirations of its members, similar to the EU.

Accordingly, the issue of Iran's joining the SCO may not worry the US, especially since there are common interests that link countries in this organization to Washington, which will result in limited positive returns for Tehran regarding the possibility of breaking US and international sanctions against it or even attempting to circumvent them. However, the Biden administration may not be able to impose its view on Iran due to the tense US relations with Russia and China, in addition to the decline in US interest in the Central Asian countries.

Accordingly, it is clear that Iran's membership in the SCO may not yield guaranteed gains, given the structural complexities within the organization, in addition to the fact that making fateful decisions is in the hands of the main players, namely Russia and China. This does not allow the rest of the members to impose their will on the decisions, which is something that the Iranian decision-making circles are certainly aware of. Nevertheless, this membership is vital for Tehran with regard to promoting external support for the policies of the Iranian regime in the face of internal and external criticism. This comes in addition to making way for the presence of Iranian officials in regional and international events, although a number of them are under international sanctions.

On the other hand, the expected gains from Iran's full membership in the SCO are relative, and have special calculations, particularly with regard to Afghanistan. Iran does not enjoy the Taliban's confidence or influence, unlike Pakistan which will also not accept any Iranian interference that would undermine its interests in Kabul. Iran's participation in the reconstruction of Afghanistan is also questionable in light of the Chinese, Russian and Western aspirations to make consensus in this regard. This may not allow Iran to be present in a satisfactory way, which reflects the difficulties that Tehran may face in its quest to play an influential role in the Afghan issue over the coming period despite its accession to the SCO.