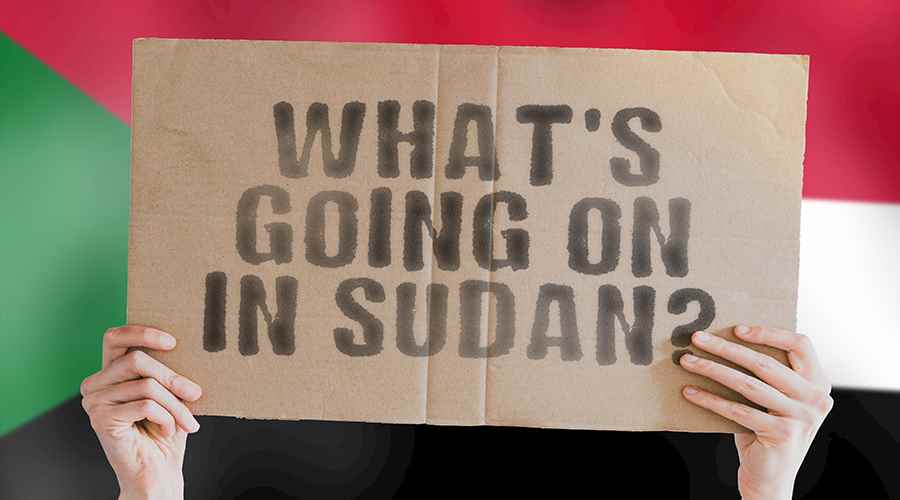 Two years after the overthrow of Sudan’s former president Omar al-Bashir, political transition is going through a critical and highly complicated phase. The government led by Prime Minister Abdalla Hamdok is facing diverse challenges and hurdles, including widespread popular protests against fuel and consumer price increases, as well as resurgence of violence in Darfur region. If the situation remains unchanged, the country can fall in a fresh structural crisis that would prompt key figures of the ousted regime to make a comeback to power. It should be noted that over the past decade, prior to the fall of al-Bashir regime, had already faced huge challenges. The secession of South Sudan caused economic shocks to Sudan, while the civil war did not only damage the Sudanese economy, but also caused an increase in the number of refugees and internally displaced persons.

This article seeks to discuss the country’s political transition and challenges facing it while also explaining what the interim government should do to bring the country back to the right track.

Transition that followed the ousting of al-Bashir has gone through ups and downs, including an attempted military rebellion, an assassination attempt targeting Prime Minister Hamdok. Additionally, the interim government did not fully abide by the terms of the 2019 power-sharing agreement signed between the Transitional Military Council (TMC) and the Forces for Freedom and Change (FFC). That is, Sudan was expected create new executive, legislative and judicial and other state institutions. However, there is still much to be done, especially in the face of the complex challenges facing the state.

Despite the overthrow and jailing of al-Bashir, the procedures of prosecution were repeatedly delated. Moreover, crimes such as extrajudicial killings and assaults committed by his security forces, were not included in the list of charges against al-Bashir. The ex-leader, however, in December 2019, was convicted of corruption and illegal possession of foreign currency and was sentenced to two years in a social reform facility. He was also charged with inciting and participating in the killing of protesters during the mass protests that led to his ousting.

In December last year, al-Bashir went on trial over his role in the 1989 coup that brought him to power. Additionally, the transitional government agreed in principle to extradite him to the International Criminal Court, a move that could see him face trial over charges of genocide and war crimes.

A matter of extreme concern is the severity of economic hardships further exacerbated by inflation soaring to 304 per cent, rising trade and financial deficits, increasing unemployment and poverty, all endangering Sudan’s stability. Moreover, more than 13.4 million people, or a quarter of the population, including 2.5 million internally displaced people, will need emergency assistance. These include some 70,000 people who fled Ethiopia. Overall, it is no exaggeration to say that Sudan needs sustainable financial and economic support.

On the other hand, the government failed to contain violence that erupted between communities in Darfur, where clashes left 165 people killed and more than 100 thousand displaced. The Sudan Liberation Army, led by Abdul Wahid Mohamed al Nur, and the Sudan People’s Liberation Movement, led by Abdelaziz al-Hilu –are not among signatories to the Juba peace agreement. They both believe that achieving the integrity of the state should be based on secularism, democracy, liberalism, citizenship, decentralization, balanced development, the free will of peoples, voluntary unity, as well as the right of the Sudanese people to self-determination, administrative and political future, as one of the real human, legal and democratic rights, all coupled with the rule of law.

In addition to that, tensions on the border between Sudan and Ethiopia renewed, where both countries have claims to al-Fashaga, part of Sudan’s Gadaref state, bordering the north-east of Ethiopia’s Amhara region.

Sudan blames Ethiopian farmers for settling in and using fertile lands on the Sudanese side of the border. The tensions have been escalating since the crisis in Tigray region erupted in late 2020, when more than 70000 refugees crossed into Sudan.

Moreover, Sudan accuses the Ethiopian forces of ambushing its soldiers and violating its air space. Shortly after that, Sudan launched military offensives to regain control over “the seized lands” along the borderline, prompting counter-accusations from Ethiopia, which demanded the situation be restored to normality. Within the same context, diplomatic efforts to reach settlement of the long-standing dispute between Ethiopia, Egypt and Sudan about the Renaissance Dam on the Blue Nile, have stopped without reaching a breakthrough.

The dispute was referred once again to the United Nations Security Council and then back to the African Union. The challenge posed here is that the less intervention from Security Council, the greater the risk of escalation. Additionally, lack of serious action setting roles and responsibilities means prevention of conflicts, a very important function of the United Nations and the African Union, is doomed to failure. Hence, tensions simmering between the three states are set to escalate and consequently have implications for regional relations, such as the border dispute between Sudan and Ethiopia and the ongoing war in Tigray.

The Sudanese state is trying to recover from the health and economic fallout of Covid-19 pandemic and the recurrent problem of locust infestation. It is clear that the Covid-19 pandemic has direct and indirect impact on Sudan’s food security. According to recent reports, families lost their household income while they are facing rising cost of living, including higher costs of medical treatment, coupled with the persistent economic crisis. Besides, measures to contain the pandemic also have indirect negative implications that restrict the ability of poor families’ access to their everyday workplaces.

Overall, the Sudanese government made some progress. This includes the promulgation of a law allowing the dismantling of the ousted regime. It also ordered the arrest of former foreign minister Ali Karti for his role in the 1989 coup d'etat that brought al-Bashir to power. The transitional Legislative Council, consisting of all the members of Sovereign Council passed a law to fight corruption after removing any conflict with the jurisdiction of the committee created to dismantle the regime of the ousted president. The body succeeded in recovering billions of Sudanese pounds in properties and businesses from members of the former regime and continues to dissolve the Islamists’ control over state institutions.

Prime Minister Hamdok also succeeded in negotiations that led to the US decision to end Sudan's designation as a state sponsor of terrorism. His government managed to involve several Sudanese armed factions in the Juba peace agreement, signed in October 2020. As a result, the Sovereign Council, on February 4, was expanded to include three such factions that are signatories to the agreement. The new cabinet, formed by Abdalla Hamdok on February 8, assumed a political and not technocratic character, and represented a wide-ranging coalition based on sharing power between the military, civilians and the armed groups.

Despite the divergent views about the ability of this politicized government, which does not involve all the political forces, representation of a majority of political movements allowed it to make tough decisions, including floating the pound. Furthermore, the government agreed to set five national priorities, which are addressing the social and economic conditions; implementation of the Juba agreement; resuming talks with the two armed groups that did not sign the agreement; introducing reforms to the security sector, protection of civilians; foreign relations and acceleration of the country’s transition to democracy.

Creditor countries agreed to cancel USD 14.1 billion of Sudan’s international debts, praising its economic reforms and efforts to fight poverty. The Paris Club of creditor nations also announced that it rescheduled Sudan’s remaining USDS 9.4 billion in debt to the group, and held out the possibility of more debt relief in the future.

On the other hand, Sudan approved ratification of the Convention against Torture and Other Cruel, Inhuman or Degrading Treatment or Punishment (UNCAT) and the International Convention for the Protection of All Persons from Enforced Disappearance (ICPPED). The approval represents a positive step towards strengthening human rights in the country.

The Sudanese government should promptly take action to reform the economy as prices of consumer goods and services are soaring. Since al-Bashir was ousted, protests against the rising cost of fuel, bread and other essentials. In any case, the recent steps taken by the government to float the country’s currency to allow it to fluctuate according to supply and demand will help restore its balance on the long run and secure international loans and grants.

However, economic reforms alone will not be sufficient unless Khartoum carries out radical reforms within the state institution and the security establishment. This requires Sudan to build its vision for the future on establishing a national project to carry out reconstruction of power and wealth and end the domination of the elite, who come from the northern and central states, who has been in control since the country’s independence in 1956, and empower other states and marginalized population.

Moreover, there is also an urgent need to address ties between the security establishment and private businesses. Hamdok’s government should also manage the risks associated with the 2020 Juba peace agreement, which integrates the rebels in the national army. That is, expansion of the security sector may cost the fragile economy billions of dollars, a cost that can negatively impact the government’s agenda for reforms, and restrict its ability to establish the principle of civilian institutional oversight and the parliamentary control of the military and security establishments.

In conclusion, in modern Sudan, wealth has always served the interests of the elite in control, who come from the central states, and benefited from the country’s huge economic resources on the expense of Sudan’s average citizens. If this fault riddling the wealth and power system is not fixed, the country is likely to move backwards and have its political transition put on hold.  The escalation of violence in Darfur shows the failure of states and the central government to protect civilians, and requires action from Hamdok’s government to defuse violence, while also taking into consideration other contributing factors such as the impact of climate change on agriculture, floods, disputes on lands and access to resources. Lastly, to achieve peace, the new Sudan should nurture the civilian leadership and dismantle the former military regime.

To achieve this, Hamdok and his government need to work out a framework for achieving stability that involves all armed factions and support institutional reforms and national security. Additionally, Sudan also needs to real transitional justice as the government’s symbolic decisions will not calm down people for a long time. Furthermore, a general national dialogue about elections should be started before the term of the transitional government comes to an end in 2022, where Sudan needs to an institutional framework that supports fair and free elections that establish a real transition to democracy that live up to the people’s aspirations.