How will the Tunisian government face current domestic challenges? 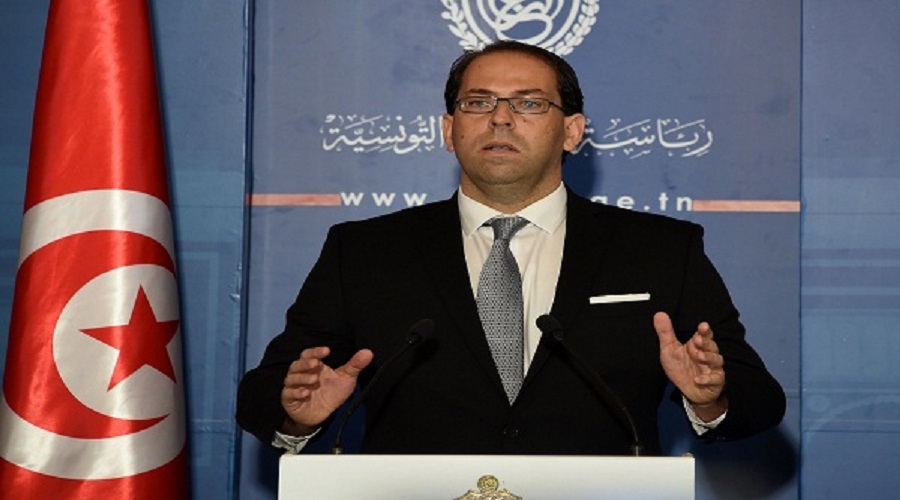 After the new Tunisian government headed by Youssef Chahed received a vote of confidence from a clear majority in Parliament, various political powers and sectors of public opinion began to demand the adoption of a number of policies to lay down a roadmap with the goal of saving the country from its current internal challenges. These challenges include the threat of terrorism, terrorist organizations, unprecedented decline in growth rates, increased unemployment and declining foreign investment. This is all in addition to various social challenges arising from the worsening economic crisis and the state’s inability to put a stop to it. The resulting pressure from these factors is pushing the new government to take drastic short-term measures in an attempt to contain the negative repercussions affecting Tunisian society.

Youssef Chahed and his new government swore the constitutional oath before President Beji Caid Essebsi on Aug. 27, 2016, after receiving a vote of confidence from Parliament during an extraordinary session held to discuss the formation of the government. Attending the session were 194 out of a total 217 members of parliament, with 167 members voting yes, five abstaining, and 22 voting no. The new government includes 26 ministers and 14 state ministers representing seven political parties, in addition to a number of unions and independent members. The secular political party Nidaa Tounes received four portfolios, the Islamist Ennahda movement received three, and the liberal Afek Tounes two, in addition to the Al Joumjouri, Destourian Movement, and Al Massar parties, the last of which has no parliamentary representation.

Looking at the formation of the new government, it can safely be said that Chahed succeeded in maintaining his own vision in choosing the members. No amendments were made to meet the criticisms or concerns of any political parties or groups. This was made clear in the following ways:

The choice of Abid Al-Breki as Minister of Public Employment and Governance and Mohamed Al-Trablousi as Minister of Social Affairs to placate the Tunisian Public Workers’ Union. As the largest centralized union in the country, it has vast social and political influence, enabling it to limit the influence of the Islamist movement.

Appointing leftist politician Samir Beltayeb as Minister of Agriculture in spite of the objections of some parties and political powers, led by the Ennahda movement.

Choosing Abdeljalil Ben Salem as the Minister of Religious Affairs. The Machrouu Tounes and Al-Jabha Al-Shabia parties had both objected to Ben Salem’s appointment due to concerns over his reportedly extremist ideas against the secularization of the state, as well as his ties to extremist Islamist groups.

Carrying over a majority of sovereign portfolios—Interior, Defense, and Foreign Affairs—as well as the Ministers of Tourism, Transportation, Education, and Population unchanged from the previous government of Al-Habib Al-Sayd.

In his address to Parliament, Chahed announced that his government’s program includes a number of major policies and procedures. First and foremost among these is talk of moving towards austerity measures by decreasing state expenses. This was accompanied by rumors of possibly laying off thousands of government employees, raising taxes on individuals and corporations, and stopping public investment in development and infrastructure to face what Chahed dubbed a, “state of economic emergency.”

For the near future, it appears that the new government will focus on addressing a number of internal challenges. When it comes to security, fighting terrorism will be the largest domestic challenge the government will face. After the government received the parliamentary vote of confidence, terrorist and jihadist groups in Tunisia sent the new government a warning by attacking a number of soldiers in the Samama mountains in the governorate of Kasserine. This caused security forces to increase their efforts on multiple fronts and led to a wide-scale sweep campaign after determining that the terrorist threat was still standing. Those efforts led to security forces successfully dismantling 200 jihadist groups. This indicates that the mountains of Tunisia have turned into “semi-safe havens” for terrorists, and more specifically, that they house training camps and arms stores.

On another hand, the new government faces the threat of terrorists returning from Libya. This is especially concerning after almost 600 Tunisian jihadists affiliated with Islamic State (ISIS) announced their imminent return to Tunisia from Libya due to the attacks carried out by the government of Fayez Al-Serag on terrorist havens in Sirt. The danger in the return of these jihadists to Tunisia is summed up in their desire to change the type of attacks they carry out. These groups now tend to plan bombings using detonator belt based car bombs, requiring the new government and its security services to increase its efforts, both financially and logistically.

On the economic front, the new government will have to face a number of challenges, including raising the growth rate, which has dropped to 0.8% in light of a Tunisia’s stifling economic crisis. Tunisia’s debt reached 56 billion dinars (22 billion euros) in 2016, thanks to an increase of 670,000 government employees, continued labor strikes, a decline in production and tourism, and a currency depreciation of 20% over the past five years. The new government is required to raise GDP growth to a minimum of 3% to resuscitate the country’s economic and social situation, attract foreign direct investment, maintain the balance of payments—especially by tackling tax evasion—and addressing the sanitation and environment problems.

As for the social front, Tunisia’s precarious social situation now presents a serious danger to the Chahed government, especially after the poverty levels in many Tunisian cities reached nearly 60% (according to some estimates). This has all led to severe social stress in Tunisia. The Kasserine governorate, one of the nation’s poorest and least employed, is at the forefront of this phenomenon. Unemployment there has reached nearly 70%, increasing the possibility of even more sit-ins and strikes to demand better social conditions. The new government will need to address these deteriorating situations quickly, lay down a development strategy, and communicate with the angry groups before the country reaches a peak of social chaos.

The formation of the new government made up of 7 different parties, shows that this coalition has helped deepen the conviction that national unity is a tall order that goes against the grain of political expediency. This has elicited numerous reactions in Tunisian society about the coalition’s ability to form a unified government vision that would be able to revive the struggling economy, ease social tension, provide jobs for the unemployed (now in the thousands), and improve the standard of living, which has deteriorated by over 40%.

It is likely that the formation of a new government in Tunisia will lead to some political repercussions. This is particularly true since the new government is an attempt to form a coalition against the protests of popular movements. Meanwhile, the government faces internal contradictions among its forming powers, which makes coming up with unified practical policies quite difficult.

The new government will face some expected challenges in the short term. Most notably, clashing with union organizations which, in spite of some participating in the negotiations for the formation of the government, refused to put up nominees to represent them in the government. It is therefore anticipated that the General Work Union will, on September 22nd, organize a general strike in hospitals. The strike has been planned for some time, and has been postponed a number of times recently. It is also likely that this strike will become the first clash between the government and unions over the country’s general management policies.

There are also increasing chances of a clash with the Ennahda movement in light of its attempts to polarize the left-leaning groups in preparation for next year’s elections. These attempts bring to light Rashed Al-Ghannoushy’s early decision to politically maneuver against the head of the new government. On one local channel, Ghannoushy incited the residents of the Al-Hod Al-Mangamy area in the Kasfa governorate (a stronghold of leftists and unionists) to continue their protests, demanding that Chahed negotiate with them about local development programs and plans for the governorate, allocating part of the income from phosphate to pay for these projects. Should Chahed meet these demands, it could lead to other governorates adopting similar economic and social demands, leading to Tunisia facing a number of factional protests in the near future

Finally, the issue of local councils (special prosecutions) may continue to be an issue between the new government and the political powers, since former Prime Minister Al-Habib Al-Sayd failed to resolve it under pressure from Ennahda. This was despite the fact that these councils were formed temporarily to manage local work after the revolution. These councils had Ennahda affiliates appointed to them with part of the state budget allocated to them. This issue is expected to last until the next local elections, which indicates that, in the short term, Tunisia is headed towards having to navigate even more difficult political situations.