How Does the Sudanese Regime Respond to the Popular Protests? 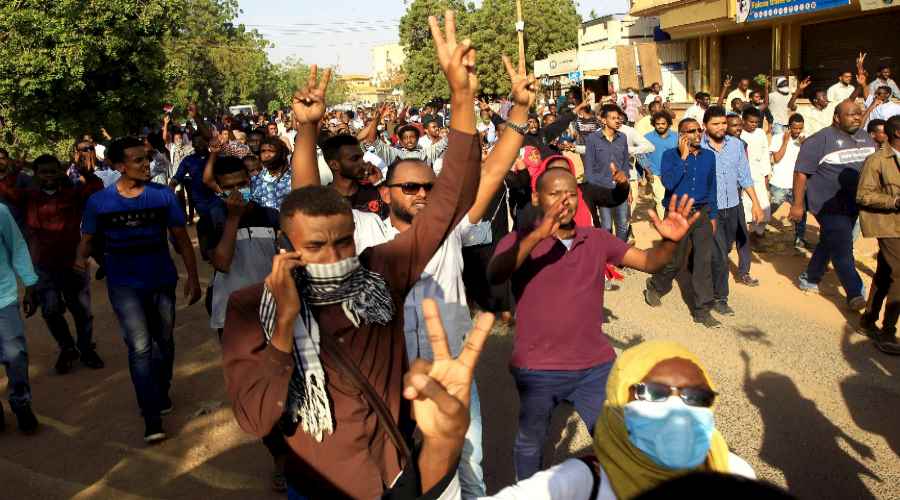 The Sudanese popular protest movement has taken the ruling regime, political forces, and the main parties in the country by surprise. Protests spiraled rapidly since December 19, 2018, spreading across Sudanese cities. Protests are driven by the rejection of segments of the Sudanese society of the economic policies and measures introduced by the government over the past three months, which have aggravated the living conditions of its citizens, making it more difficult to predict the repercussions of protests on the regime.

Protests first flared up in the northern city of Atbara, Port Sudan in the east, and al-Nuhud in the west, then escalated to include 14 out of 18 Sudanese states, joined by university and school students. Demonstrators set ablaze several government centers and headquarters of the National Congress Party (NCP) in a number of Sudanese states and cities. Protesters raise slogans against the economic policies of the government and others advocating freedom, peace, and justice. However, security forces responded with heavy-handed force. Eight people were killed, according to the government’s account of the events. However, the opposition said a total of 22 people were killed and scores injured. An Amnesty International report said the death toll had reached 37 people. Protesters upped the ante demanding President al-Bashir to step down, prompting security services to disperse demonstrators and arrest dozens of them.

What distinguish these protests is that they were spontaneous and not associated with political opposition forces and parties, and have been driven by non-politicized youth movements, such as Girifna (“We Are Fed Up”), and “Youth for Change”, which were founded in the wake of the recent economic policies adopted by the government, spurring the former to call the people through several websites and social media platforms, to take to the streets.

As protests gained momentum, several political parties and trade unions joined forces. The Central Committee of Sudanese Doctors (CCSD) (a non-recognized parallel entity) went on a strike in support of the protests against the ruling regime. The Sudanese Professionals Association, in all the professional and labor sectors, called for a march to present a memo to the Presidency demanding President al-Bashir to immediately step down and form a transitional government with specific missions, which prompted the Sudan Call and the National Consensus Forces (NCF)- which agreed to unite opposition forces and support protests in the country after the march- to issue a joint statement urging the demonstrators to continue the revolutionary tide until the overthrow of the regime and handing over power to a transitional government. This is the government called for by al-Sadiq al-Mahdi, the leader of the opposition Umma party and Sudan Call coalition, after returning to Khartoum from abroad. While his call was hailed by the ruling party, it was questioned by the Sudanese political forces, which have grown skeptical over a deal between the ruling regime and al-Mahdi for a political settlement for the 2020 elections. This has frustrated many of his supporters, leading some of the party’s young activists to leave the party, before he changes his stance and calls for regime change.

Despite the absence of political parties in advocating for such protests, some of them supported the protests, with the National Congress party calling for a road map to get the country out of its current crisis by forming a caretaker government after the regime’s failure to find effective solutions to Sudan’s crises. The Communist Party hosted a meeting of the Sudan Call and the National Consensus Forces (NCF) in support for the popular protest movement.

The Justice and Equality Movement (JEM) in Darfur, in the words of its leader Jibril Ibrahim, also declared its support for the current protests, viewing it a revolution against the regime, as evident in the attacks against the headquarters of the NCP, not a hunger revolution that can be resolved when the bread crisis ends, and pointed out that the armed movements must not join the protests under the pretext of protecting the revolution. The leader of the Muslim Brotherhood announced on the second day of the protests that the group supports the popular protests and stands by the citizens. On the other hand, media outlets close to the group in some countries launched a campaign against President al-Bashir, a move that some analysts view as a coup by the group against al-Bashir. This can be attributed to al-Bashir’s dissociation from the group in one of his televised meetings in 2016, in addition to his recent visit to Damascus, which runs contrary to the group’s policies and interests.

Motives Behind the Protests

The economic factor played an instrumental role in the outbreak of the protests. Although it has been the key factor in the renewed crisis in the country for years, it has coalesced with some other factors, which can be outlined as follows:

1- Deteriorating economic conditions: The rise of bread prices from 1 to 3 pounds, in addition to the lack of fuel, bread and medicine, and the cash crunch, all of which have coalesced and drove citizens to take to the streets. This comes at a time when the Sudanese economy is facing challenges due to the lack of foreign exchange, and the failure of the government to find radical solutions to those challenges, which has ultimately compelled it to borrow and devaluate the local currency. These problems led the inflation rate to soar above 68%, according to the data of the Central Bureau of Statistics in September 2018, and the Sudanese pound to plunge sharply against the US dollar ($ 1 equals 47.5 pounds), per the official rate.

2- Constitutional amendments: In addition, al-Bashir declared that he will run for the presidential elections in 2020, in contravention to the constitution. It should be noted that 293 MPs, representing 33 parties, submitted a proposal to the Speaker of the Parliament to amend article 57 of the constitution, allowing for the extension of al-Bashir’s presidency term, which has been going on for almost 29 years.

3- Elites’ differences: Apparently, there are disagreements within the regime, particularly between the Prime Minister and the Director of National intelligence, despite the former’s denial. Reports indicate a divergence of views between them on handling the current economic crisis, which has turned into a muted battle. While Motazz Moussa, the Prime Minister, wants to introduce policies to persuade merchants and citizens to deal with banks, Salah Gosh, Director of National Intelligence prefers the security approach. The power struggle extends to the leaders of the ruling party, as there are attempts to thwart government policies and drive a wedge between the government and the citizens. In addition, some parties oppose extending President Bashir’s term, as evident in the explicit accusations leveled by the Commander of the Rapid Support Forces (RSF) Mohamed Hamdan Daglo, at government officials of causing the liquidity crunch that has hit banks for several months.

4- Weak opposition: The opposition is plagued by fragmentation, discord, and a weak organizational structure, casting doubts on its ability to lead the street. This has been in the interest of the regime which benefited from this situation and tried to co-opt some parties and armed movements to conclude peace agreements with them. As a result, the Sudanese street lost faith in the opposition, questioning its ability to bring about real change in the country.

The Sudanese regime has acknowledged the existence of economic crisis, that it is tackling it, and can understand street protests. In this context, the government has taken a set of measures:

1- Official statements: The first government statement was issued on the third day of the outbreak of protests, stressing that the security forces have dealt with the demonstrators in a civilized manner without suppression, and that they will not tolerate any chaos. At the same time, Information and Communications Minister Bushara Aror asserted that al-Bashir will not step down and that the people have the freedom to choose their president in the next elections, scheduled in 2020.

It was also pointed out that there were infiltrators who engaged in subversive activities to destabilize the country’s security and stability, the statement claimed. Salah Gosh, the Director of National Intelligence, accused the Sudan Liberation Movement (SLM), led by Abdel-Wahid al-Nur of sending elements, some of whom were recruited by the Israeli Mossad, to carry out subversive acts amid the protests, an allegation the group denied. In a speech in the town of Wad al-Haddad in the Gezira state, al-Bashir mocked a rumor of his arrest and putting him in prison, vowed to prosecute them, and called on citizens not to heed those whom he labeled as traitors and agents who exploit the crisis and seek subversion.

2- Security measures: The government banned the publication of El Jareeda and El Tayyar newspapers, blocked social media websites, declared a state of emergency in 5 states and curfew in other states. Some states suspended study at universities and schools until further notice. Security forces rounded up several opposition leaders and other protesters. At the same time, the Sudanese armed forces and the National Intelligence and Security Services pledged support for President al-Bashir.

3- Economic pledges: President Al-Bashir vowed to introduce economic reforms that would provide a decent life for citizens. Salah Gosh announced that subsidies for flour and fuel will not be removed in the future, and that measures will be taken to ease living conditions by January 2019, as the government began bidding for wheat and flour imports and signed an agreement with South Sudan to import oil.

4- Neutralizing the external front: The Sudanese Ministry of Foreign Affairs has clarified the current situation in the country for the diplomatic missions in Khartoum, emphasizing that the government realizes the reasons for the protests as a result of the current economic crisis; it has responded to peaceful protests in a civilized manner, confronted the saboteurs and infiltrators, in a preemptive move to prevent any likely intervention if the situation deteriorates.

Although some analysts suggested that the protests in Sudan would wind down as the economic situation improves, protests are still raging despite all the economic pledges. Against this backdrop, here is a set of the likely scenarios:

1- Containing the protests: The government may not respond to all the demands of the protesters, given their escalating demands and calling for a radical change of the regime, and would rather issue only some economic decisions to defuse the crisis. Protests may be contained by employing various mechanisms to restore normalcy. What makes this scenario likely is that the state institutions support al-Bashir, in addition to the neutralization of the international stance on the protests.

2- Elections in 2020: Al-Bashir may backpedal on recent economic measures, amid the continued pressure on his government. He may announce other decisions, including not amending the constitution and not running for the upcoming elections in 2020.

The first scenario seems more likely, given al-Bashir’s pledge to resolve the current crisis, playing for time to outstay the protests. What enhances this scenario is that the protest movement lacks a clear leadership, the weakness of the political opposition and its inability to mobilize the people, as well as the fear of an alternative scenario that may plunge the country into the unknown.