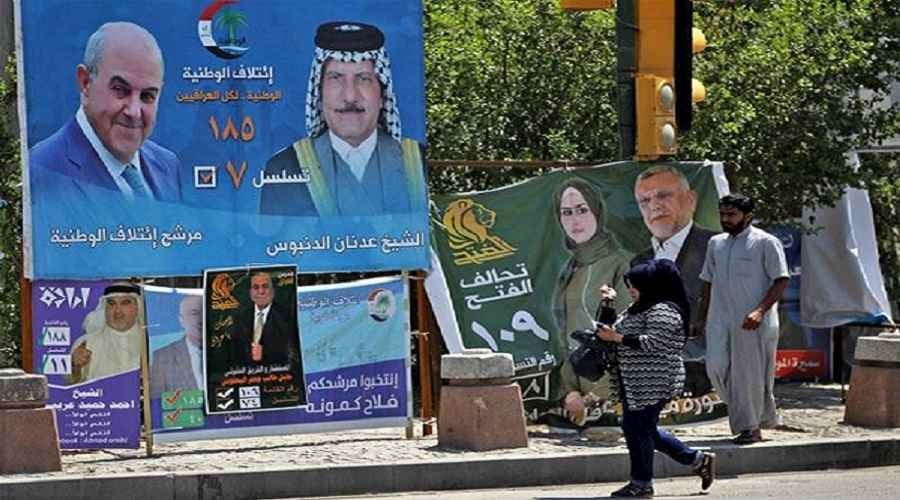 The most important indications of Iran’s deep interest in Iraqi legislative elections is the United States’ early warning of Tehran’s intentions to sway sway the elections' outcome, Tehran’s sponsorship of the al-Fatah al-Mubin alliance, led by Hadi al-Amiri, as well as statements from Iranian officials.

Iran tries to sustain its influence on the Iraqi elections because Tehran recognizes that this would preserve its strategic goals in Iraq. The most important of these goals are to employ Iranian influence in Iraq and preserve it because it is Iran’s most powerful tool while also ensuring that Shia continue to dominate power. This Iranian bid to massively influence the upcoming elections faces several obstacles. Most importantly are the limits drawn up by the supreme religious authority for the elections, the current U.S. plan for post-ISIS Iraq, and the current fragmentation of the Iraqi Shiite bloc.

Tehran’s wide interest in the parliamentary elections, slated for May 12, is driven by the view that they represent the main access to sustaining Iran’s influence on the Iraqi arena through a bid to create a large loyal bloc at the upcoming Council of Representatives to be able to name the next prime minister or exert large influence on this process.

Indications of Iran’s deep interest in Iraq’s legislative elections and its bid to influence results to serve its own goals in Iraq can be outlined as follows:

1- United States’ Early Warnings. In mid-March, U.S. Secretary of Defense James Mattis, warned that his country  has “worrisome evidence that Iran is trying to influence - using money - the Iraqi elections. That money is being used to sway candidates, to sway votes.” He said that it is not an insignificant amount of money.

In this context, Iraqi government spokesman Saad al-Hadithi, in response to the U.S. warnings, said that that the use of foreign money in domestic politics “is illegal and unconstitutional. He further stressed that the government is taking great efforts to hold free and fair elections and prevent the manipulation of election results.

2- Iran’s Sponsorship of the al-Fatah al-Mubin Alliance. Iran backed the creation of the alliance headed by Hadi al-Amiri, the second-favorite candidate for premiership after the current prime minister Haider al-Abadi after the new parliament is formed. In this context, the alliance includes all the factions operating under the Tehran-allied factions of the Hashd al-Shaabi, most importantly the Badr Organization, Asa'ib Ahl al-Haq, the Islamic Supreme Council of Iraq, in addition to small Shia parties and entities.

3- Iranian Officials’ Statements about the Legislative Elections. Such statements include the one that came from Ali Akbar Velayati, the top adviser to Iran's Supreme Leader Ali Khamenei, during his visit to Baghdad on February 17. He stressed that his country “will not allow the liberals and the communists to govern Iraq.”

Additionally, Iranian ambassador to Iraq Iraj Masjedi, shows an interest in these elections and always gives relevant comments. In his latest statement, he stressed the need for maximum participation in the Iraqi elections. Additionally, Iran’s unofficial interest in the Iraqi elections became evident in the country’s media including newspapers in following them up in a serious manner and offering relevant analyses of their implications on a continuous basis.

Iran’s quest for perpetuating its influence on the Iraqi elections and consequently the selection of the country’s next prime minister is driven by  an awareness that this would sustain its strategic goals in Iraq the most important of which are as follows:

1- Security Concerns, Iraq’s Power and its Potential Threat to Iran. Essentially, Iran aims to achieve three main goals. The first goal is to prevent chaos from breaking out in Iraq and escalating to a threat to its own security. The importance of this goal became evident after ISIS emerged in Iraq. The second is to prevent an anti-Iranian Shiite figure from becoming a prime minister. The third is to prevent the re-emergence of a strong Iraq that can threaten its own security.

2- Employing Influence in Iraq to Serve Iran’s Other Issues. Iran has a perennial interest in possessing cards in its deck to play in issues on which it has influence, and most importantly Iraq.  The aim to use them in its pending international issues, namely those revolving around its nuclear program. In this context, it should be noted the course of the U.S.-Iran relations in the past few years indicates Tehran’s interest in using its cards on the Iraqi arena whenever it bargains with Washington.

3- Sustaining its Influence in Iraq as its Most Powerful Leverage. For Iran, Iraq became more important than ever over the past years, especially after the crisis in Syria gradually transformed to a civil war, and regional and international polarizations around Syria reached its highest level. As a result, decision makers in Tehran recognized the importance of sustaining Iran’s influence in Iraq because it the most powerful tool compared to other regional issues in which Iran has influence, and also because it is the best regional alternatives that are available for Iran, currently.

4- Ensuring Shia’s Continued Dominance on Power. Iran’s interest in further intensifying its influence in Iraq is part of of its interest in ensuring to keep the current political equation in Iraq unchanged, where Shia forces dominate Iraq’s political regime. In this context, Iran is aware that potential changes in the current power hierarchy and reduction of Shiite influence in Iraq can possibly foment sectarian tensions with Iraq. For this reason, first and foremost, it is concerned with the Shiite dimension and the unity of Shia to the extent that this became to dominate its policy.

5- Preventing Institutionalizing the Role of Washington and Allies after ISIS is Defeated. Iran sought to prevent this process on the long-term in Iraq, and opposed U.S. military presence and long-standing military bases near its border. In its view, such presence aims to surround Iran from its western border.

Currently, and after operations against ISIS in Iraq are over, Iran seeks to indirectly force the U.S.-led global coalition to exit the Iraqi arena and ensure its role would not further expand. In this context, it recognizes that possessing political tools inside Iraq in the coming period will help achieve this goal.

6- Iran’s Desire to Continue to Rein in Iraqi Kurds’ Power. That is because it fears any potential growth of the Iraqi Kurds’ power in the future, and the possibility that they would resume their bid to break away from the Iraqi central government. The reason is that this bears negative implications for the Kurdish issue inside Iran itself, where they account for 10 per cent of the population.

Iran’s bid to substantially influence the upcoming parliamentary elections in Iraq faces a group of obstacles that can be outlined as follows:

1- Limits Drawn up by Iraq’s Supreme Religious Authority for the Elections. Led by Ali al-Sistani, this clerical authority is among the most significant political drivers of Iraq’s policy. After parliamentary elections, it always offers its opinion on Iraqi candidates for premiership. This was clearly stated regarding both Nouri al-Maliki and Haider al-Abadi.

The supreme religious authority’s attitude from incumbent prime minister al-Abadi indicate its strong support for a second term for him, which opposes Iran’s current bid to support Hadi al-Ameri’s nomination for prime minister.

In this context, it should be noted that al-Sistani’s stressed that former senior officials who are corrupt and those who have failed should not be re-elected.  The call was widely understood to mean former prime minister al-Maliki. Al-Sistani also called Iraqis not to elect sectarian people, and his warning was interpreted to mean Hadi al-Ameri, who is backed by Tehran.

2- The Current U.S. Project for Post-ISIS Iraq. Following Nouri al-Maliki’s rule, which allowed Iran to cut deep in Iraq, the U.S. concluded that it is necessary to back moderate Shiite figures bidding for premiership to prevent Iran from expanding its influence in Iraq. That is, it appears to be satisfied with current PM Haider al-Abadi, who is considered in some circles in the U.S. as Washington’s man in Baghdad. The implicit U.S. support for al-Abadi’s bid for a second term is evidenced in its condemnation of Iran’s interference in the Iraqi elections. As a result, Iran’s current plan for interfering in the Iraqi elections will face opposition specifically from the Americans.

3- Fragmentation of the Iraqi Shiite Bloc. This bloc is participating in the upcoming parliamentary elections with five separate coalitions. These are the Nasr Al Iraq coalition, led by al-Abadi; the al-Fatah al-Mubin coalition, led by Hadi al-Ameri; the State of Law coalition, led by Nouri al-Maliki; the Sairoun Alliance, led by cleric Muqtada al-Sadr; and the al-Hikma, led by cleric Ammar al-Hakeem. This is unprecedented for Ira’s Shiites who contested elections in 2005, 2010 and 2014 with two main coalitions. This fragmentation will make it more difficult for Tehran to achieve Shiite consensus about a certain figure it prefers for the position of prime minister after the elections are over.

It cannot be asserted with any certainty that Iran’s current policy towards the Iraqi elections can continue in this manner after the elections. That is because Iran’s policy is characterized by flexibility and political realism that may allow a comprehensive change to this policy thus making it possible to eventually earn the loyalty of the Shiite population. This is evidenced in the fact that Iran sacrificed Nouri al-Maliki after the 2014 legislative elections.

Iran’s backing for Hadi al-Ameri at the expense of Haider al-Abadi could be no more than a message to, and pressure on al-Abadi to dissuade him from his current policy of opening up to Arab states in general and Saudi Arabia in particular. The message would read that Iran can use any seats garnered by the al-Fatah al-Mubin Alliance to bargain with al-Abadi on this issue in particular at the new parliament when a vote is held to choose Iraq’s next prime minister.