Why did Rouhani Vow to Increase Iran’s Missile Production? 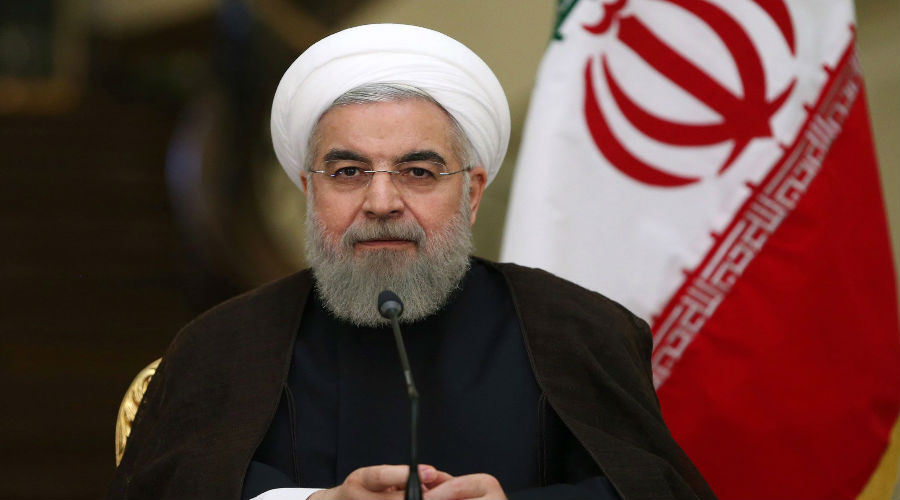 Iranian President Hassan Rouhani recently signaled that Tehran will not change its position on the 2015 landmark nuclear deal or its role in the Middle East. During an October 29, 2017 session of the Consultative Assembly (the parliament), he emphasized that Iran will not hesitate to build, produce and store any weapon of any kind it needs to defend itself. He added that Iran IS building missiles, and will continue to do so because this does not contradict international law and is not in conflict with the July 2015 UN Security Council’s Resolution 2231, which calls on Iran to suspend, for eight years, all specific research and development activities related to missiles capable of carrying nuclear weapons.

Rouhani’s vows have not ruled out the possibility of Iran producing and storing weapons of mass destruction  to defend itself which will likely cause fresh controversy. Rouhani’s statements may be used by several involved powers and parties to accuse Iran of continuing a secret military aspect of its nuclear program away from the oversight of the International Atomic Energy Agency.

This appears to be pushing Iran to reiterate claims that it is not seeking to acquire nuclear weapons. It may even resort once again to a fatwa (religious edict) by Supreme Leader Ali Khamenei against the acquisition, development and use of nuclear weapons, to give special importance to its policy, although there are views that question the existence of such a fatwa and argue that even if there is one, it would not entail any commitments on the state’s official policy on this particular issue.

Undoubtedly, Iran aims to send out several contradictory messages simultaneously in a bid to confuse the political calculus of world powers, and in particular those more concerned with Iran’s actions in the Middle East. Such actions cause serious repercussions on regional security and stability as part of Tehran’s policy of “division of roles” to which it adopts when it comes under strong international pressure, as is the case now.

It is possible that Rouhani, through his recent statement, wanted to respond to the U.S. House of Representatives’ near-unanimous vote for a new sanctions bill against Iran’s ballistic missile program, part of an effort to clamp down on Tehran without immediately moving to undermine an international nuclear agreement. US lawmakers voted 423-2 to pass the sanctions legislation aimed at Iranian entities and individuals involved in developing and building ballistic missiles and conventional weapons, as well as foreign government entities and individuals involved in supplying, facilitating or funding the program through importing, exporting and re-exporting banned weapons and related materials to and from Iran.

Undoubtedly, what prompted Rouhani to give a quick response is that the sanctions legislation represents Washington’s first step towards complying with President Donald Trump’s October 13 speech in which he refused to formally certify that Iran is complying with the accord and ordered the Department of Treasury to start imposing sanctions on Iran’s Revolutionary Guard Corps.

In other words, Rouhani’s recent statements perhaps indicate that there are views within Iran’s decision making bodies that Washington is serious in its threats to act to counter Iran’s continued violations of the nuclear deal as well as its regional behavior that contributed to escalation of various crises and helped terrorist organizations expand in crises-hit states in the region.

Hence, it would not be possible to separate Rouhani’s statements from Khamenei’s October 25 statements in which he emphasized that Iran’s regional role is not up for negotiation and bargaining because it represents a strategic depth. This indicates that Tehran is no longer interested in the possibility of holding negotiations with Washington over non-nuclear issues, as was the case  during the Barack Obama administration. The reason is the new policy adopted by Washington after the Trump Administration took office in February 20, 2017.

Moreover, through his keenness on asserting that Iran will keep building ballistic missiles, Rouhani seeks to preempt any moves that some European states might make towards reaching compromises on the escalating disagreement between Washington and Tehran, over specific terms that Iran uses to circumvent the 2015 nuclear deal, as well as issues related to Iran’s behavior in the Middle East.

Within this context, several reports indicated that French President Emmanuel Macron is considering a visit to Tehran to hold talks with Khamenei and other Iranian officials to persuade them into showing more flexibility about the demands from the US and other world powers regarding Iran’s ballistic missile program and regional activity. Macrom may also send his foreign minister Jean-Yves Le Drian to Tehran to explore the possibility of the Iranian leadership’s acceptance of these demands.

The reports came amid statements from other European capitals that revealed a relative preparedness to go in line with some of the United States’ positions on Iran. These include Germany which on October 11 expressed concern over Iran’s attempts to circumvent restrictions on the sale of dual-use items for its ballistic missile program.

Accordingly, Rouhani appears to be seeking to preempt France’s possible move in the coming period by asserting that Iran will continue the same activities that raise the concerns of world powers and push them to accuse Iran of not transparently dealing with goals set by the nuclear deal.

Undoubtedly, this position indicates that Iran still believes that the nuclear agreement has given it multiple options in dealing with the possibilities of ending the deal it or continuing the escalation with Washington in the event of this happening.

This, however, does not negate the fact that Iran’s insistence on pursuing this hard line policy can decrease these options and bring unprecedented pressure on it at a time when it may face a new issue with the European powers already adopting some aspects of the US policy on Iran. These include, in particular, the multiple negative repercussions imposed on the security and stability in the Middle East by Iran’s continued development of ballistic missiles.