This Is An Uprising

How Nonviolent Revolt is Shaping the Twenty First Century 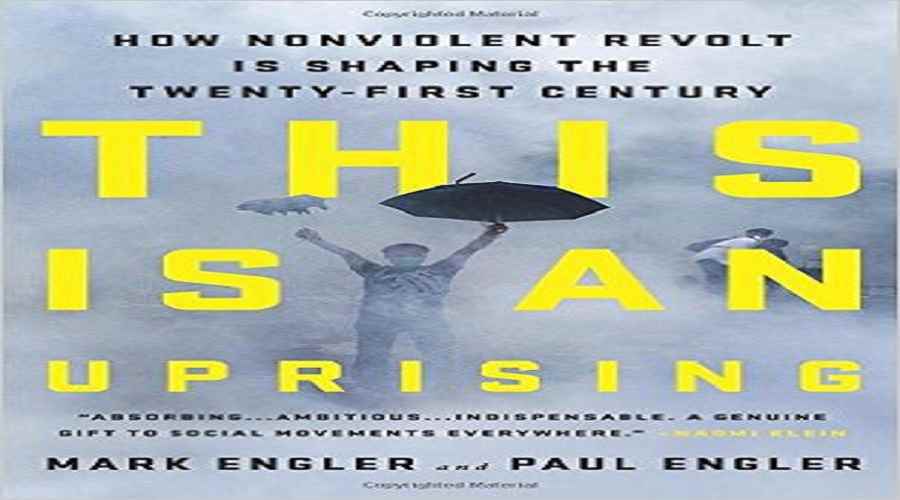 Mark and Paul Engler take a look at historical and recent examples of mass protest, uprisings, social movements and the use of strategic non-violent action to examine the core principles behind such transformative unrest, and the impact on change within institutional frameworks. According to the authors of This Is an Uprising, non-violence is usually seen simply as a philosophy or moral code.[1] So when mass media portrays uprisings or social movements as spontaneous, unplanned, uncontrolled, or emotional[2], the Engler brothers seek to examine the dynamics behind non-violent action that goes beyond being taken by surprise, to understand how transformation occurs within society. According to the authors, the book “is concerned with a specific phenomenon: momentum-driven mass mobilization”[3] that “uses the tools of civil resistance to consciously spark, amplify, and harness mass protest.”[4]

For readers not familiar with non-violent civilian protest and history of community organizing, This Is an Uprising provides a sound background on seminal works within the research field including that of Gene Sharp and Saul Alinksy. This is where criticism of the book comes into consideration. While the amount of historical research presented in the book is well commended, one felt that it was merely written in an introductory format and that there was no expansion on already present theoretical frameworks within the research field.

Having said this, in each chapter of This Is an Uprising, the Engler brothers provide a clear and nuanced analysis of historical non-violent tactics used to confront and bring about social change.[5] The book engages with readers through both empirical and anecdotal research on previous movements, including the Civil Rights movement, and the Otpor movement in Serbia, among many others.

The book provides a balanced outlook on how these movements were successful, but also how they failed, such as the case with Egypt, where the authors state, “that the revolution in Egypt presents a troubling case”[6] whereby, “not all efforts to create change prevail over the long term.”[7]

The Engel brothers rightly point out at how research into mass mobilization has often neglected, and that outbreaks of disruption are often bound to incorrect explanations, such as the element of surprise, rather than conscious efforts by individuals to bring about change through non-violent strategies. In the concluding chapter of This Is an Uprising, the Engel brothers state that momentum-driven mass mobilization “goes beyond transactional goals by also advancing a transformational agenda, and it wins by swaying public opinion and pulling the pillars of support.”[8]

This Is an Uprising is a great introductory resource for understanding how advocates of mass mobilization, organization building, nonviolence, and disruption managed to shake if not topple institutional pillars to bring to reality their transformational visions. The book is especially timely in the wake of protests covering a myriad of issues across the globe, and will certainly attract the attention of a number of readers interested in this research field.

Mark Engler and Paul Engler. This is an uprising: how nonviolent revolt is shaping the twenty-first century. New York: Nation Books, 2016.