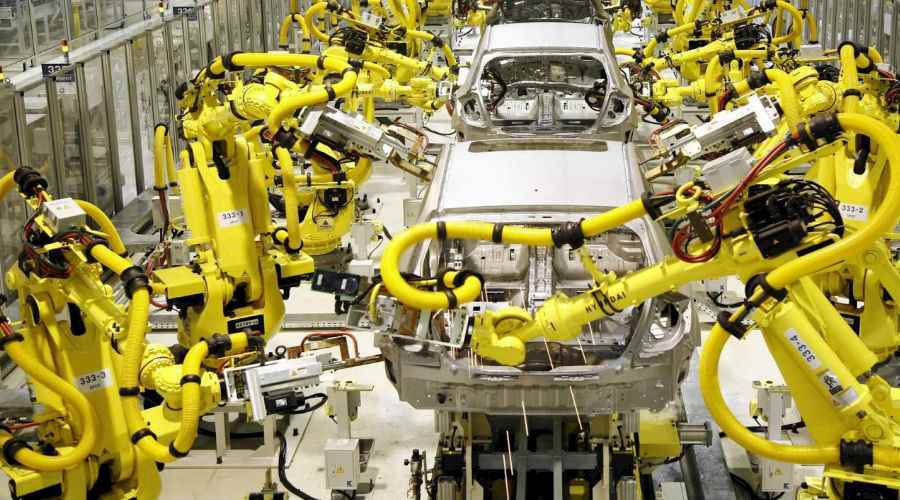 The world today is witnessing the emergence of the fourth industrial revolution. The digital revolution burst onto the labor markets of various sectors through innovating jobs and processes that require new skills, where intelligent automation and robots are the new workforce. This can be evidenced by observing the number of industrial robots operating all over the world, which has amounted to 1.6 million units in 2015, and is expected to increase by an additional one million units by 2019.

This raises several questions regarding the future of the labor market and jobs, as well as the means of facing the repercussions of robots’ prevalence and intelligent automation. This might lead to technological unemployment, which is caused by the intensive use of technology in society to replace human capital.

Industrial robots can be defined as machines, whether mobile or fixed, that can be automatically controlled through programming to perform multiple tasks, and can be used in industrial automation applications.

As for the most significant sectors that use industrial robots, one can state that almost 70 per cent of those robots operate in the automotive, electronics, metals and machinery production industries. It is worth noting that around 135 thousand industrial robots were used during the last six years (2010-2015) in the US industrial sector, mostly in the automotive industry; accordingly, the IFR report ranked the US in the second place, behind Japan, in the use of robots.

The report also reveals that the average international ratio of robots to human capital in the labor market in 2015 amounted to 69 robots per 10 thousand employees in the transformative industries sector. According to the report, the most robot intensive labor markets are in South Korea -due to the increased usage of robots in the production of electronics, vehicles and electric devices- followed by Singapore, Japan and Germany.

Meanwhile, McKinsey Global Institute’s report, issued in July 2016, shows through the analysis of more than 800 jobs in the American labor market that the jobs in the industrial sectors (59 per cent), food (73 per cent), retail (53 per cent) accommodation and hospitality (73 per cent) are among the most endangered jobs by automation and use of robots. These sectors are witnessing notable technological development, imperiling them highly by the threat of automation.[2]

On the other hand, there are a wide range of activities and jobs that are less vulnerable to the threats of automation and the replacement of humans by robots. Those vacancies involve managing and developing human resources (9 per cent) or those that entail the use of experience in decision-making, planning and creativity (18 per cent). This is also applicable to all the other activities related to creative cognitive work, such as working in the field of programming, advertising and marketing. The significance of human interaction is also highly obvious in the sectors of healthcare and education, where the probability of automation significantly decreases.

As for developing countries, they are still far from producing such technology or achieving successful innovations in this field, as such they are only end-users. However, the diminishing cost of producing and applying such modern technology may contribute to its wide spread in the years to come. This necessitates readiness to counter the negative implications of using such technology in the labor market, especially in light of the sensitivity of these countries’ economies to such impacts; as most of them do not rely on diverse economic activities and depend on a labor-intensive operation patterns.

Moreover, a high percentage of the workforce in developing countries is low skilled and has a low level of education. Thus, these countries will –unprecedentedly- face an increase in unemployment rates, loss of jobs and inequality in wages. Accordingly, developing countries, not only need a plan for strategic transformation to cope with technological progress, but also need to attain a competitive advantage.[3]

Despite the great opportunities the digital revolution offers in terms of creativity and innovation in all fields and the fact that it makes lives easier; it is expected that it would have several repercussions on labor markets and employment opportunities in the coming years, the most significant of which are:[4]

1- Increased probability of job loss: Several economic experts expect that intelligent automation and use of robots will likely replace humans in several fields and jobs, especially routine low skilled jobs. This means that several workers within such fields might lose their jobs, and cause what can be called “technological unemployment”, that is to say the loss of jobs due to technological development.

Accordingly, the World Economic Forum’s report on the future of jobs pointed out that robots will replace 5 million jobs by 2020. Meanwhile, a study titled “The Future of Employment”, conducted by Carl Frey and Michael Osborne from Oxford University in 2013, expects that around 50 per cent of jobs will disappear in the coming four to five decades.[5] However, the differences between countries in the volume of labor threatened by automation and in the probability of job loss should be taken into consideration. The differences are based upon several criteria, such as the dependence of those countries’ economies on technology and technological investment, the sectors on which the economy depends, how business is organized and managed, and finally the skills of the workforce.

One of the most significant examples of the role of automation in job loss is evident in the actions of Foxconn -one of the biggest companies globally in the field of electronics- in 2016. The company laid off 60 thousand employees, and replaced them by robots and modern manufacturing technology to perform routine repetitive tasks. Foxconn also announced that it will depend on training; enabling employees to acquire skills that add value to the manufacturing process, such as research and development skills; monitoring production processes and quality control.[6]

2- Affecting the categories and qualities of available job opportunities: Digital technology might also lead to a decrease in the number of available job opportunities on the macro-level, and cause a qualitative critical change in the available opportunities. This change will occur due to the decreasing demand for routine and low-skill jobs and an increase in the demand for jobs requiring intermediate or advanced skills; such as jobs that require interaction skills and can hardly be automated, like handling new data and information, as well as solving technical problems.[7] Moreover, this change is occurring faster than before as currently several highly demanded professions and specializations did not exist ten years ago.

3- Widening the gap of skills and equality: In the context of job losses and decrease in the numbers of available job opportunities, the economy is expected to face increasing polarization and variation in the labor market. This is, partly, because technology consolidates advanced skills, but at the same time replaces routine jobs. Thus, technology forces many workers to compete for low-wage jobs, and consequently, their wages significantly drop. On the other hand, the wages of the highly skilled labor will increase due to the increasing demand for it. This situation raises several concerns about wage equality, labor rights and social security coverage. Generally, the gap in skills and equality in wages might be coupled with some political and social impacts. In response, all domestic partners, including the educational institutions and social security networks, will need to coordinate comprehensive interventions to face these negative repercussions.[8]

Based on the aforementioned, several institutions and economic forums, such as: the International Labor Organization, the World Economic Forum, the Organization for Economic Cooperation and Development and the World Bank, conducted studies and presented the necessary recommendations to support policy makers, institutions and even individuals to take the required steps to preemptively deal with the impacts of this technological revolution. The most prominent of these recommendations are the following:[9]

1- Modernizing education: This is a long-term solution where reform takes long years to yield results. Generally, governments should shoulder the responsibility of continuously modernizing the education system to anticipate preemptively the skills required in the future. It should further work on including them in the curricula to provide the students with these required skills, and enable them to cope and adapt to the future labor market. Among these skills are the digital know-how, creativity, innovation, managerial and leadership skills, entrepreneurship and complex problem solving, in addition to making use of digital technology in providing educational services.[10]

2- Lifelong Training: Companies and business owners should prioritize the continuous training of workers during the timespan of their employment and enabling workers to acquire the needed skills. This process will allow achieving compatibility between humans and machines to increase productivity. Companies and business owners also need to consolidate a culture of training, through offering students technical training scholarships, known as apprenticeships, as well as vocational and other sorts of training.

3- Liquid Workforce: This entails the ability of a workforce to modernize itself, adapt with the labor market requisites by acquiring the needed skills. It further requires establishing a culture of flexibility to change and shift jobs according to the skills and work needs.[11]

Finally, one can say that shifting to using robots and intelligent automation is no longer a choice, and the increasing dependence on them has become one of the main features of the fourth industrial revolution. This entails not only using them, but also having the skills and abilities to operate them in all economic sectors; as well as benefiting from their advantages in facilitating business and increasing productivity. In addition, facing the negative repercussions of these innovations should also be taken into consideration, by adequate preparations for the labor market, to achieve efficient compatibility between man and the machine; and preparing the citizens for the jobs of tomorrow, in view of the digital revolution.

[2] Michael Chui, James Manyika, and Mehdi Miremadi, “Where machines could replace humans—and where they can’t (yet),” McKinsey Global Institute, July 2016.

[4] “Automation and Independence Work in a Digital Economy”, Policy Brief on the Future of Work, OECD, May 2016, p1.

[7] “Automation and Independence Work in a Digital Economy”, Policy Brief on the Future of Work, OECD, Op. cit, p1-2.