Can Iran preserve its interests in Latin America? 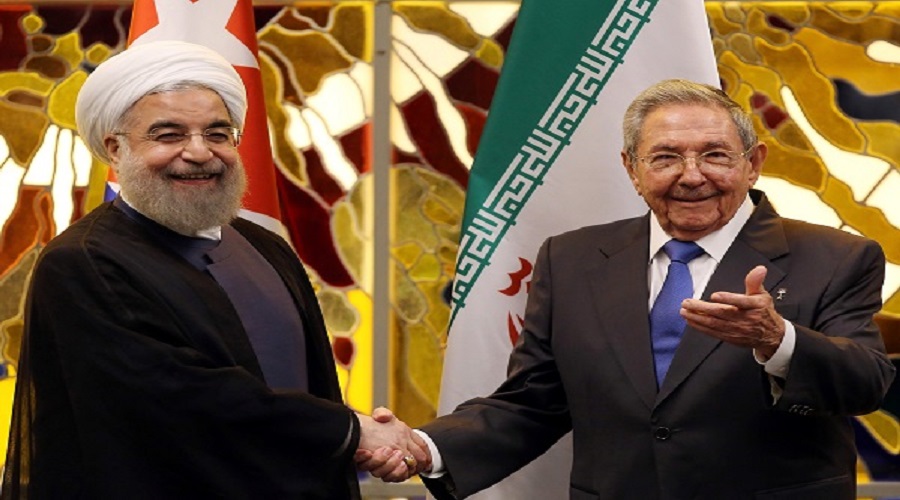 The most notable feature of these trips and meetings is that they targeted the most left wing, radical governments on the continent, and those most opposed to American hegemony. Apart from Chile, all states are members of the Bolivarian Alliance for the Peoples of Our America (ALBA), which aims to integrate the nations of Latin America.

Despite the world powers (P5+1) signing a deal with Iran over its nuclear program early this year, including promises to gradually lift Western sanctions against Iran, tensions between Washington and Tehran have repeatedly risen to the surface in recent months.

Tehran, therefore, has a strong incentive to resume applying pressure by building ties with countries to the south of the US, and emphasizing that it has no intention of withdrawing from the continent, but will continue to see it as a top foreign policy priority, building on the strong ties it has established within the region.

The last two visits by senior Iranian officials to Latin America had much the same aim as most Iranian activity in the region - serving Iranian interests as represented in the following:

Tehran sees preserving friendly ties and mutual understanding with Latin American countries, a bloc with considerable clout in the international community, as an important way of supporting Iranian policies both in the Middle East and across the world.

Several Latin American states have adopted policies concerning the Middle East that are compatible with those of Iran, especially in Syria. The most influential states on the continent have supported the regime of Bashar al-Assad, to varying degrees. Some have rejected the Syrian revolution since the beginning, accusing other countries in the region of causing the rise of terrorist groups in Syria through their financial and political support for opposition groups.

Internationally, votes from Latin American countries in international forums have supported Iran in its disputes with the United States over its nuclear program. Rouhani and Zarif’s visits were aimed at preserving ties with allies in support of Iranian policies both now and in the future. That is especially apparent during Zarif’s visit when statements by both local and Iranian officials repeatedly talked of “countering Western hegemony” and supporting the “resistance economy.”

Iran, like many Latin American countries (particularly Venezuela), has been hard hit by the fall in oil prices. Therefore, Tehran has made significant efforts to work with the oil-producing nations on the continent to adopt policies that will ensure raising the price of a barrel of crude oil and offset their economic losses.

Zarif’s visit was planned specifically for the purpose of discussing this issue. Official statements from his hosts, especially in Caracas, confirmed that a Venezuelan-Iranian deal had been struck to take a unified stance on dealing with the oil price crisis. In the last Iranian-Bolivian meeting, between Rouhani and Morales, the two presidents said they were making joint efforts to stabilize oil prices and preserve a reasonable price and fair production quotas at the meeting of OPEC nations in Algiers. When Rouhani met his counterpart in Ecuador, they agreed to call on other states to abide by oil production quotas set by the group, while refraining from violating the rights of others.

3. Iran’s economic opening after the lifting of Western sanctions

While Tehran is preparing for an economic open-door policy to the world, it still suffers from a lack of capacity to trade with its immediate neighbors, either due to boycotts (as in the case of the Gulf states) or because of political and military strife in several Arab countries. Therefore, Iran has sought out new economic opportunities, even in distant lands.

Despite the gradual easing of international sanctions against Iran, the Islamic Republic still suffers from a lack of Western investment. On top of that, the reluctance of banks to work with Iran, because of warnings sent by the United States government, has meant that in practice the sanctions have not been fully lifted.

To overcome these obstacles, Iran is seeking to develop its economic and commercial relations overseas. In this regard, Zarif’s visit was fruitful in economic terms, especially regarding banking. For example, Zarif signed a memorandum of understanding over joint Ecuadorian-Iranian banking. He also signed an agreement regarding transfers between the Central Bank of Iran and the Central Bank of Venezuela, in order to find a way of easing trade, bank transfers and economic cooperation between the two countries.

After his return, Zarif confirmed that his Latin American trip had offered opportunities to establish broader economic relations - both strengthening ties with countries that already had strong ties with Iran, such as Venezuela, and initiating relations with other countries for the first time, such as in Chile.

The private sector enjoyed a large share of the successes of this visit. When Zarif met the Nicaraguan president Daniel Ortega, he expressed the desire to see the Iranian private sector take part in the new Nicaragua Canal project. The project will create a waterway that will join the Atlantic and Pacific Oceans and play a significant role in international trade, posing as a serious competitor to the Panama Canal. Construction is set to begin at the end of this year and to be finalized by 2020.

Rouhani’s meetings in other states also resulted in economic and banking deals. In his meeting with the Bolivian president, the Iranian President confirmed his country's willingness to support development projects in Bolivia and the importance of investment cooperation between the two states.

Iran faces several challenges in spreading its influence in Latin America, most prominently:

1. The rise of right-wing governments

The rise of the left in Latin America was a major incentive for Iranian-Latin American cooperation over the last decade. While the previous president, Mahmoud Ahmadinejad, made active diplomatic efforts towards the region, this policy was not successful in the absence of Hugo Chavez, Lula da Silva, Daniel Ortega, Rafael Correa, Fidel Castro and other left-wing leaders.

The common denominators between Iran and left-wing Latin American governments were a desire to resist American hegemony, and criticism of Washington's foreign policies in general -- both in terms of interference in its neighbors’ affairs, and its geographical reach in Latin America and the Middle East. The arrival of the right wing governments in some Latin American countries represents a major threat to Iranian interests in the region.

The best example of this is a fundamental change in the official position of Argentina towards Tehran over the AMIA bombings, an attack on Argentine Israelite Mutual Association building in 1994. The Argentinian president, Mauricio Macri, annulled a memorandum of understanding with Iran over the issue, which was signed by President Cristina Kirchner’s government in 2013, promising that Iranians accused of involvement in the affair would not be prosecuted. What happened in Argentina may be repeated in other Latin American states as governments move from left to right.

2. The growth of Arab Gulf activities in Latin America

The Gulf Arab states, notably the United Arab Emirates, Saudi Arabia and Qatar, have shown an apparent interest in strengthening their ties with Latin American countries. Qatar and Saudi Arabia have both hosted the Summit of South American-Arab Countries (ASPA) in 2009 and 2015 respectively.

3. The return of the United States to Latin America

The United States was largely absent from Latin American Affairs for two decades, despite its geographical proximity, partly because of being distracted by crises in the Middle East. Now it has returned with new tools at its disposal to deal with the new governments that are in power in Latin American states.

The most obvious example of this is a resumption of relations between the United States and Cuba, after five decades of conflict and blockade. The American President Barack Obama surprised the world when he visited Cuba in March 2016. Therefore, despite the fact that the United States and Iran have signed a nuclear deal in principle, the United States still poses a significant threat to Iranian influence in Latin America.

In conclusion, two visits by senior Iranian officials to individual American states in August and September 2016 confirmed that Iranian diplomacy is working hard to preserve its interests and its economic, cultural and intelligence presence in the region. These assets constitute a valuable tool in Tehran’s relations with the United States. Recent tours by Iranian officials also reflect a determination to face down competition from the Arab Gulf States in Latin America.