Keeping Up with Transformations 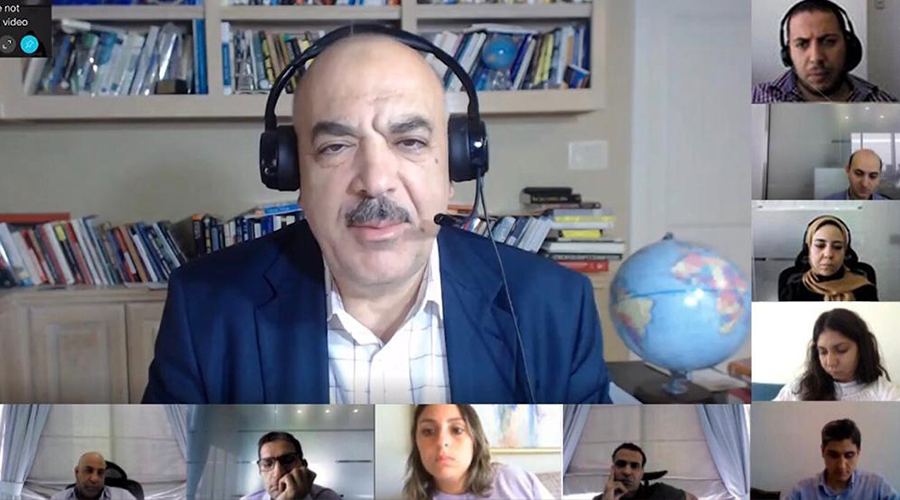 The whole world, led by advanced nations, continues to pursue carbon neutrality policies in implementation of the 2015 Paris Agreement, which aims to bolster global efforts to fight climate change and curb carbon emissions. The endeavor raises several questions, specifically about the extent of the impact these policies have on the oil industry, as well as about how best to keep up with the ensuing changes.

To address these questions, the Future for Advanced Research and Studies, better known as FARAS, organized a seminar featuring Anas Alhajji, an energy expert, to discuss carbon neutrality and its impact on the global oil industry.

Alhajji stressed that the world, led by advanced countries, adopted five approaches to achieve carbon neutrality at some point in the future. He outlined these approaches as follows:

1-   Electricity generation using renewables: Several years ago, both developed and developing countries started to further promote the use of a mix of solar and wind energy for power generation.

2-    Launching programs to enhance energy efficiency in economic activities: These are aimed at saving energy in sectors such as transportation and construction. Developed nations have gone a long way in achieving this goal, unlike developing nations, which are making only slow progress.

4-   Using biofuel: The use of this type of fuel is expanding to power more cars even in the industrial sector around the world, with Brazil being a leader. The two main types of biofuels are biomass, which is still not fully agreed on as a renewable energy source, and bio-oils, derived from crops, and widely-used in tropical countries such as Malaysia and Indonesia.

5-    Promoting the use of clean fuel: Several countries imposed strict rules for using clean sulphur-free fuel in transportation and manufacturing. This is coupled with efforts being exerted by international organizations. For instance, the International Maritime Organization has decided that ships should use fuels with sulphur content less than 0.5 per cent.

Alhajji said that currently fossil fuel continues to have a significant share in the energy mix in both developing and advanced countries. Fossil fuel accounts for 88, 81 and 80 per cent of the energy mix, in Japan, the United States and Britain, respectively.

The expert noted that even in special cases, such as Brazil where fossil fuel accounts for only 46 per cent of the energy mix, these reductions have resulted not from expanding use of solar and wind energy, but from high-capacity hydro and nuclear power and biofuel. He added that details reveal that fossil oil continues to account for an average of 35 per cent of the energy mix in advanced nations.

The speaker also noted that the impact of carbon neutrality policies on global demand for oil is not the same in different geographical regions or economic sectors. Decreasing demand for oil in the developing countries will be less than it is in developed countries, while its impact is more obvious in the electricity sector than in other sectors. According to Alhajji, the average global demand for crude oil, at 100 million barrels per day before the Covid-19 pandemic, will plummet due to the expanding implementation of carbon neutrality policies, which at the same time are expected to slow down the growth of global crude demand.

Alhajji also outlined factors leading to a limited impact of carbon neutrality policies on the global oil demand up to the year 2050, as per the following:

2-   The need for stable controllable energy sources: Despite the global expanding use of renewables for power generation, in Europe in particular, there are reasons rendering these countries unable to completely give up fossil fuel. They need a steady flow of energy supplies, such as gas and diesel, and not solar or wind energy, which can be interrupted by weather conditions. This was evident over the past months in a number of European countries that resorted to the use of coal and diesel to generate electricity after wind currents became weaker.

3-   Increasing demand for oil: Global demand for fossil fuel, including oil, is set to rise in the future as a result of increasing consumption. For example, crypto coins mining is expanding globally alongside global data centers, which means more energy is needed to meet growing demand. Moreover, manufacturing wind turbines and electrical cars will also need additional supplies of petrochemicals manufactured by the oil industry. This simply means that the demand on oil is rising as a result of the expanding renewables industry.

5-  Likely failure of government policies: International organizations hypothesize that all countries are capable of ideally implementing carbon neutrality policies. Theoretically, this would be associated with a steep drop in the global oil demand. However, this hypothesis is simply inaccurate as governments often fail to complete the implementation of their own policies, due to diverse political and economic reasons.

1-    Totally ignoring environmental policies and continuing to focus solely on oil and gas production without any consideration to developments on the global stage.

2-    Preparing for exiting the oil industry and producing as much crude as possible. This approach is likely to be followed by some oil-producing countries.

3-   Confronting global shifts: Countries and businesses seek to reduce the impact of carbon neutrality policies on their commercial interests and investments through collaboration to improve the attractiveness of the oil industry. In the United States, oil companies sued President Joe Biden for his decision to halt new oil and natural gas leases on public lands and waters.

4-   Cautious adaptation: Oil producing countries and companies are adapting to global developments by expanding the petrochemical industry, on which the renewables and car industries rely to manufacture a big part of their components. Some of these stakeholders are pursuing low-cost policies to reduce their carbon footprint through the use of modern technology for carbon capture and even by getting rid of fossil fuel assets and moving them to other countries such as China.

The speaker and the participants concluded the seminar by stressing that considerations such as cost reduction and energy security enhancement will prompt both developed and developing countries not to completely give up fossil fuel, despite their recent announcement on adopting carbon neutrality policies. This would maintain the global demand for oil at 100 million barrels per day or a little lower. However, despite all expectations, oil-producing countries will have to keep up with the developments in the efforts being made to counter climate change by expanding the use of carbon footprint reduction technology in the oil and petrochemical industries such as carbon capture and storage.