How the war in Tigray is impacting Ethiopia's economy? 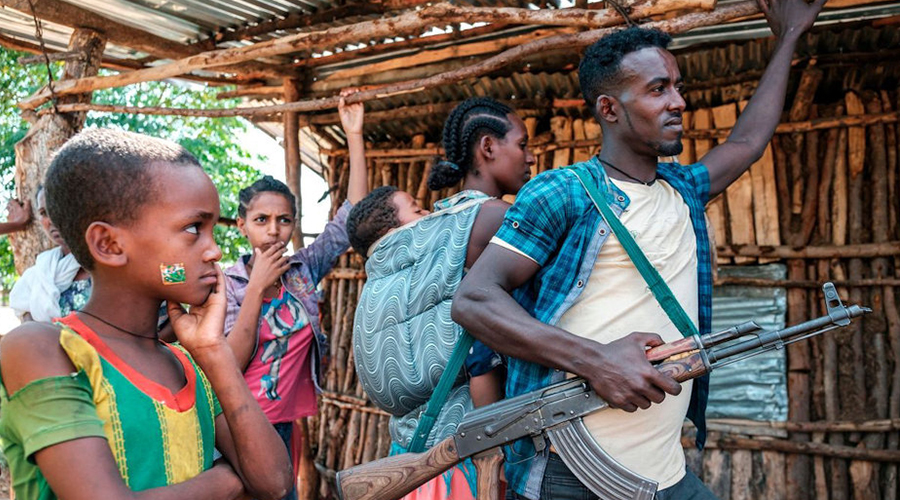 The internal conflict in Ethiopia has recently intensified, especially after the Tigray People's Liberation Front (TPLF) became close to taking over the capital Addis Ababa, and after the government headed by Prime Minister Abiy Ahmed declared mobilization of Ethiopians in August. The development threatens  the perpetuation of the conflict and further complicates the Ethiopian crisis, and even jeopardizes the integrity of the Ethiopian state itself. Overall, the escalation is set to exacerbate the already intricate situation in the African country. This analysis seeks to focus on the economic cost of the ongoing civil war in Ethiopia and its direct and indirect impact on Ethiopia's economy.

Undermining the Model for Growth

The internal conflict, which broke out months ago in Ethiopia, is taking a heavy economic toll. The high cost of the war imposed a heavy burden on the economy especially after stagnation hit all the world's economies because of the Covid-19 pandemic. As a result, international institutions lowered their estimates for Ethiopia's economic growth to 2 per cent for 2021, from 6 per cent in the previous year, according to the World Bank.

The real gross domestic product (GDP) growth averaged 10.9% in 2004-2014, driven by economic reforms. This made Ethiopia a model for economic recovery in Africa and one of Africa's fastest growing economies up to 2019.

The International Monetary Fund, however, withheld its GDP growth forecast for Ethiopia in its latest World Economic Outlook for the next four years due to instability across the country. In its previous Outlook, the IMF forecasted that Ethiopia’s real GDP growth will go up to 8 % by 2022.

No doubt, the political and security developments in Ethiopia caused a fast-paced economic deterioration that not only slowed down the economic growth, but also were reflected in the domestic and foreign performance indices and led to a deterioration of the living standards of Ethiopians.

Ethiopians across the country, and especially in the Tigray Region, are suffering from the ongoing civil war. The government laid siege to the region when the conflict broke out, which caused more than one million Ethiopians to suffer from a lack of food security. Furthermore, some 2.5 people in Tigray Region are now in need of all kinds of humanitarian aid, while more than 18.6 children are in need of medical treatment from diseases caused by severe malnutrition. On top of that, basic services, electricity, fuel supplies and communications suffered a blow because of  the war.

Additionally, the war caused huge casualties. Thousands of people were killed and millions others were rendered homeless. The number of the internally displaced civilians by the war went up to 2.1 million, according to the Food and Agriculture Organization (FAO). An estimated $30 million in emergency humanitarian aid is needed to alleviate the humanitarian crisis in Ethiopia.

The UN Refugee Agency (UNHCR) reported that more than 47,000 Ethiopians fled to neighboring Sudan while some 96,000 Eritrean refugees already in the Tigray region ran out of food supplies, mainly because their camps are in the embattled region.

During the ongoing turmoil in Ethiopia, the number of people infected with Covid-19 has recently increased dramatically, especially because essential health services suffered a blow across the country and some 1400 health centres were destroyed, according to the Ethiopian health ministry. The number of confirmed cases of COVID-19 went up in recent months reaching over 372000, according to the World Health Organization.

Despite a lack of data on the direct economic cost of the ongoing war between the Ethiopian army and the TPLF, the implications of the conflict for Ethiopia's economy can be laid out as follows:

The Secretary-General of the United Nations Antonio Guterres, in August, said that the conflict in Ethiopia had already drained over $1 billion from the country’s coffers, which includes military spending. According to the Stockholm International Peace Research Institute, Ethiopia's military spending stood at $460 million in 2020.

The months-long conflict hit the whole economy in Ethiopia. Economic growth is expected to drop to less than 2% this year, the lowest in more than two decades. The economic impact of the war, however, is not limited to the Tigray region. It is spilling over to all other regions and sectors, including agriculture, mining and manufacturing industries.

Due to the worsening economic situation, the Ethiopian central bank suspended all lending and money transfers as well as all coverage for direct imports. The move has largely caused a crisis in the exchange market and a lack of foreign reserves. As a result, the official exchange rate of the local birr currency, as well as the black market exchange rate, dropped significantly. The USD-birr exchange rate dropped to 45, after the local currency was trading 35 to the dollar last year. Parallel market rates went up to as high as 75 to the dollar, especially after the Ethiopian government declared mobilization of the public for the fight against the TPLF.

The annual inflation rate soard from 18 % before the war over the Tigray region to 34.2 % in October. Food prices spiked 40.7% to a 10-year high, threatening the living standards and food security of Ethiopians, to further exacerbate poverty and unemployment which already went above 17%.

The soaring inflation rate can be attributed to the government's increasing military spending which caused a budget deficit while tax revenues dropped to less than 9 % of the GDP. Additionally, the security situation affected agriculture and industries across the country and disrupted essential food supplies.

The ongoing war has scared investors away from the Ethiopian market, especially recently after the political and security situation worsened. Investments in the Tigray region bore the brunt of the war. Many factories and mines were shut down across the region, but the economic impact of the war spilled over into other regions in recent months. Global companies closed their operations in Ethiopia. Global fashion giant PVH Corp. has closed its manufacturing facility, the largest factory in Ethiopia’s model industrial park in the city of Hawassa. The company's decision was encouraged by the US Administration's suspension of Ethiopia's membership in the African Growth and Opportunity Act (AGOA) due to gross human rights violations during the current conflict. It should be noted that the Ethiopian government suspended plans to award a second a new telecommunication license foreign companies. Later, in May, it awarded a license to a consortium including Vodafone Group , but due to instability in the country, it is not clear whether the consortium can carry out efficient operations.

The ongoing conflict has a direct impact on the country's foreign trade. Every month, Ethiopia is losing some $20 million in export revenue after the industrial facilities in the Tigray region were shut down, according to data from the Ethiopian Ministry of Trade and Industry. The annual revenue is estimated at $7.3 billion, more than 85 % of Ethiopia's foreign trade passes through Djibouti port.

There are indications that if the war continues, Ethiopia will fail to pay off due its foreign loans, especially as the government increased borrowing in recent years to finance infrastructure projects.

In October, Moody's Investors Service lowered Ethiopia's sovereign credit rating, a sign of the country's deteriorating economy and growing concerns over the country's ability to pay off debts.

Back in February, the Ethiopian government sought help from the International Monetary Fund to benefit from debt relief  under the G20 “Common Framework" aimed at helping the country to alleviate the damage caused by the Covid-19 pandemic.

Ethiopia lost some of the support offered by Western partners. The European Union suspended budget support worth 88 million euros ($107 million) over the current conflict. The suspension caused a huge loss for Ethiopia which relied on foreign aid to fund various development projects across the country.

The current political and security crisis threatens not only Ethiopia's economic future, but also the integrity and existence of the state. This is especially so because the crisis was further exacerbated after the TPLF fighters reached the capital Addis Ababa. Any attempt to estimate the economic cost of the war would not largely be precise enough, especially because the Ethiopian government has not officially released data on military spending or mobilization of fighters recently declared.

However, there are signs that the economic cost of the war, in the short term i.e. military spending, and also in long term, is unarguably huge. That is because of the worsening economic situation, the shrinking flow of direct foreign investments, the weakening local currency as well as the slowing and even halting of nation-wide projects.

The conflict even threatens the sustainability of the Ethiopian economy as concerns over the state's ability to pay off mounting debt. The damage is not only economic. The security crisis massively impacts human development, food security, inflation rates, employment, health and education and complicates an already worsening refugee crisis.

Ethiopia's way out of the current economic crisis appears to be hinging on the restoration of political and security stability across the country, a prerequisite for making required measures to resolve the economic turmoil. When the war comes to an end, dealing with the losses would require the Ethiopian government to embrace a national strategy based on three major pillars. The first is to introduce plans for direct support and emergency aid to the groups that were most affected by the war, in cooperation with international organizations already operating in Ethiopia. The second is to hold negotiations with donor parties and organizations to carry out a program for restructuring and rescheduling the state's foreign debts in a way that takes the current economic situation into account. The third and last pillar is to introduce fiscal and monetary reforms aimed at treating the damage caused to the economy. The focus here should be kept on two sides: addressing the increasing budget deficit through rationalization of military spending and re-mobilizing national resources back into prioritized sectors while also addressing anomalies in the exchange market that directly impacted inflation rates.