Why Iraq’s Al-Sadr is insisting on rejecting Iran’s pressure to include the Shiite Coordination Framework? 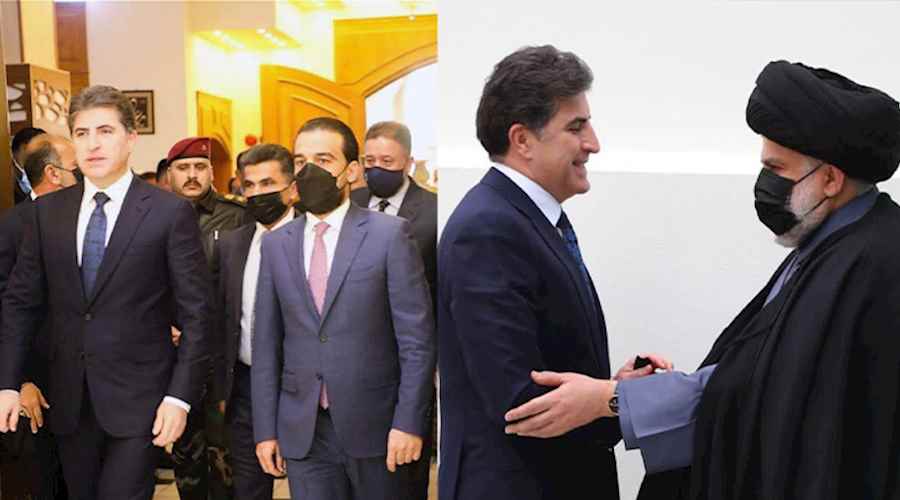 Iraqi Kurdish leader Masoud Barzani on January 31, launched an initiative to bridge gaps between Muqtada al-Sadr and his rivals in the Shiite Co-ordination Framework. The initiative was discussed by President of the autonomous region Nechirvan Barzani, Speaker of the Iraqi Parliament Mohammed Al Halbousi, and the leader of the Sadrist Movement at his office in Najaf City. The move came one week before the Iraqi parliament held a session to elect a new Iraqi president who will ask the candidate of the largest parliamentary bloc to form a new government.

Pre-conditions of the Initiative

Iran continues its attempts to influence efforts to form a new Iraqi government by putting pressure on al-Sadr to include all forces in the Shiite Coordination Framework in the new cabinet, including Nouri al-Maliki, leader of the State of Law Coalition. The Sadrist Movement categorically rejects pressures from Tehran which seeks to achieve its goal through the following moves:

In a second secret visit to Iraq in January, the commander of the Iranian Revolutionary Guard Corps Quds Force Esmael Qaani went to Erbil to meet Masoud Barzani and other leaders of the Kurdistan Democratic Party. Unconfirmed sources say that he first went to Sulaymaniyah, where he met with leaders of the Patriotic Union of Kurdistan including co-chair Bafel Talibani.

Kurdish sources say that General Qaani asked Barzani to put pressure on Muqtada al-Sadr to allow parties from the Shiite Coordination Framework to join the new cabinet, as well appoint al-Maliki as vice president of Iraq. The sources also noted that Barzani’s answer was that he will send this request to the tripartite alliance.

Qaani’s visit was also aimed at bringing about rapprochement between the two Kurdish parties and backing the Patriotic Union of Kurdistan’s nomination of Barham Saleh for President of Iraq. Qaani asked Barzani to give up the nomination of Hoshyar Zebari for the presidency and leave the position for the Union. Barzani rejected the request and stressed that parliamentary voting will have the final say on the presidential nomination.

Sources say that General Qaani was in Baghdad and contacted political forces, including Khamis al-Khanjar, leader of the Sunni Azm Alliance, in Samarra City on January 29 and other Sunni leaders.

3.    Meeting with Kawtharani in Tehran:

Qaani’s moves for Iraq coincided with meetings held by Mohammad Hussein Kawtharani, the representative of Hezbollah in Baghdad, and co-founder of the Iraqi Kataeb Hezbollah. At the request of Qaani, he held several meetings with the commanders of the Kataeb as well as the Asa'ib Ahl al-Haq and other factions of the Popular Mobilization Forces.

Through this request, Qaani seeks to shirk responsibility for escalation triggered by these militias, and to claim that he is trying to bring their activities under control, especially after their involvement in a rocket attack on Baghdad International Airport in late January. Additionally, Iraqi intelligence agencies announced that they arrested Akram al-Qaisi, one of the suspects involved in the attack. Prime Minister Mustafa al-Kadhimi, on February 1 announced that the government had intelligence on the terrorists who carried out the attack, a sign that the government is planning escalation of security operations against Iran-backed militias involved in the attack.

Al-Kadhimi made the statements after al-Sadr called on the government to take the toughest possible security measures and identify those involved in the acts of violence. This means that he is prepared to enter into an open confrontation with the Iraqi militias allied with Iran which continues to carry out terrorist attacks. No doubt, government action against these militias threatens Tehran’s interests. The armed groups are well aware that they have lost their popular base, which means that choosing to enter into any military confrontation with the Iraqi government, or for that matter trying to mobilize the Shia top clerics, will have serious consequences and may well put an end to Iran’s last proxies in Iraq.

Barzani’s proposal came amid Iran’s intensified moves. Its implications as well as al-Sadr’s reaction can be explained as follows:

Following the meeting with Qaani in Erbil, Barzani proposed that Nechirvan Barzani, Mohammed al-Halbousi, who leads the Taqaddum party, to hold talks with Muqtada al-Sadr about how to keep the political process alive and remove pending issues and obstacles. But remarkably, Barzani only forwarded Qaani’s requests to al-Sadr without endorsing them, which means that he launched this initiative only as a compliment to the commander of the Iranian Quds Force.

Additionally, the Kurdistan Democratic Party did not respond to pressures from Iran to force it to withdraw from the tripartite alliance. The main reason is that Barzani is interested in maintaining good relations with the United States, and rejects Iran’s persistent attempts to reduce his relations with other states.

The party’s position was unequivocally expressed by a leading figure, Raibin Salam, who emphasized that “Al-Sadr, Azm, Taqaddum and the Kurdistan Democratic Party are the most powerful and are the winners at this stage.” He explained that any bloc that is not willing to join this alliance should join the opposition because Iraq is a democratic state in need of powerful opposition.”

Salam further said that the message that the Kurdistan Democratic Party and the Sunni bloc want to send across is that they back a national majority government that will be formed by the three alliances.” He also said that the party previously joined a consensus government but did not get positive results,” a clear sign that Barzani does not back Qaani’s request.

In a tweet, following his meeting with Nichervan Barzani and Mohammed al-Halbousi, al-Sadr said: “Stop the violence and terrorism against the people and partners. We continue to back the formation of a national majority government.” He was referring to some Shiite factions in the Shiite Coordination Framework. In reference to his rejection of al-Maliki’s participation in the new government, al-Sadr also welcomed dialogue with “the patriotic opposition.”

It should be noted that the Coordination Framework called for including all its parties, as well as al-Maliki, to the new cabinet, and giving them six portfolios, the right to veto the selection of a new prime minister as well as naming al-Maliki vice president. The call was categorically rejected by Muqtada al-Sadr.

Al-Sadr believes that he does not have to make any concessions to the Framework bloc as the tripartite alliance - which includes the Sadrist Movement, the Kurdistan Democratic Party, and al-Siyada coalition, which includes Taqaddum and Azm, control more than a half of the parliament’s seats; i.e. 171 out of a total 329 seats. The Sadrists have 73 seats, the Kurdish party 31, while the al-Siyada coalition has 67 seats.

In light of this, and because al-Sadr rejects pressure from Qaani, the Framework alliance proposed a settlement whereby it gives up the right to veto the selection of a new prime minister, gets four to six cabinet portfolios, and have al-Maliki named vice-president. This proposal was categorically rejected by Muqtada al-Sadr, as said above.

3.    Divisions within the coordination framework:

Different positions are being taken within this bloc. While some call for staying in the opposition camp, others call for giving up Nouri al-Maliki and joining al-Sadr government, especially given that a deadline has to be met. The Iraqi Parliament will hold a scheduled meeting on Monday to name a president for the country, ask al-Sadr to form a new government. Moreover, the Coordination Framework now has little weight in the parliament and already lost popular support, which makes it unable to cling to its positions.

But despite all that, the forces that believe that al-Maliki should be jettisoned now ask for guarantees from al-Sadr. For example, they want the Popular Mobilization Forces to be spared from any accountability or influence whatsoever, as well as sparing specific commanders from crackdown on corruption. These demands are spurred by fears that al-Sadr may well crack down on al-Maliki on corruption charges. But, again, al-Sadr refuses to accommodate these conditions.

It can be said that Barzani’s initiative has not caused any change in the position of the tripartite alliance, led by Muqtada al-Sadr, on the formation of a national majority government, and on allowing al-Maliki to join it. This does show that Iran’s influence on Baghdad has already significantly waned, and that the only options available for the Coordination Framework, are to choose between worse and the worst, i.e. either staying in the opposition or join the al-Sadr government after surrendering to his conditions, which will certainly mean bringing up the issue of arms in the possession of the “the militias that are not under control.”